Vientiane, Laos -- The founder of Lao Buddhist Sangha, the Most Venerable Dr.Phramaha Phong Samaleuk, who is also the President of Lao Buddhist Fellowship Organization and of Wat Ongtue Mahavihara has passed away at the age of 100 years and 6 months, at 5.11 pm, October 7, 2015. 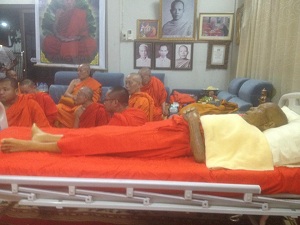 The most Venerable Phong Samaleuk was a Sangha veteran of 81 pansa (vassa), Born on 10 April, 1916 in the village of Kungnoi, Thailand he was the sixth child of a family of nine children.

At the age of 10, he entered primary school at Kusakorn. He finished year 3 of primary school when he was 14 years old and then moved to Phonthong district, Champasak province, Laos.

When he was 15 years old, he went back to his hometown, Kungnoi village, to become a novice. He remained as a novice for 1 year and 3 months. He later disrobed due to poor health. After that he went back to Phonthong district, Champasak province, Laos.

At the age of 20, he again moved to his home town in Thailand and took a higher ordination as a Bhikkhu at Wat Phosy on 1 October B.E. 2479 under the preceptor of Venerable Rith, Venerable Xou, Venerable Suan, and Venerable Phoun (as Kamavacariya). Forty one monks also participated his ordination ceremony.

When he was newly ordained, he lived at Wat Siphonthong in Kusakorn village for 6 months. Later, on 8 April 2480 B.E, he moved to Bangkok for further education. There, he lived in Wat Chanasongkram for almost 16 years. It was here that he passed the Higher Dhamma studies and earned Pali-grade sixth (VI) certification.

The late Venerable Dr.Phramaha Phong Samaleuk had worked tirelessly for the benefits, happiness and well-being of the Lao people.

Notable contributions of the late venerable includes the following:

His final activity was the participation of an international conference on “Buddhism Unites Suvanabhumi", held in Siem Reap, Cambodia.

The body of the late venerable Samleuk will be preserved for dedication ceremonies and for public observances at Wat Ongtue Mahavihara, Vientiane. The cremation ceremony will be announced within 3 or 6 months.