Paris, France -- Institut Ganden Ling, founded by Dagbo Rinpoche has announced that the respected Vajrayana Dharma Master is now recovering after a successful operation. The venerable suffered a heart failure while on a teaching tour in India. 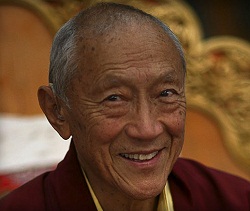 In their statement, the institute said that "... Rinpoche came back from his India tour very weakened on Tuesday (October 13). He was immediately taken to the hospital the next day for pulmonary infection."

Upon examination, doctors found that Rinpoche has had a heart failure, (silent infarctus) during his stay in India. Rinpoche was then transferred to the intensive care unit on Oct 16, 2015 where doctors performed a long and complicated operation, where blood clots were reportedly pumped out and a stent put into place.

It was reported that the operations went well and Rinpoche has been advised to have a complete rest from his regular activities.

Institut Ganden Ling further announces that "all upcoming teachings between now and January, namely those in Neuchâtel (Switzerland), Biarritz (France), Haarlem (the Netherlands), Indonesia and Malaysia has been cancelled."

The institute further encourages all centers to recite prayers to Tara (either Tara’s meditation or the 21 prayers to Tara or even a few mantras during a couple of minutes), while meeting each other in thought at 9am and/or 9pm to facilitate Rinpoche’s recovery.

Born in Kongpo, located in southeastern Tibet, Dagpo Rinpoche was recognized by the Thirteenth Dalai Lama as the reincarnation of Dagpo Lama Jampel Lhundrup when he was only two years old. At age six, Rinpoche entered Bamchoe Monastery where he first learned to read and write, studying Tibetan Buddhism.

At age thirteen, Dagpo Rinpoche began studying Buddhist philosophy at Dagpo Shedrup Ling. When he was twenty four, he continued his studies at Drepung Monastery.

Throughout his studies, Dagpo Rinpoche had the opportunity to study under many great Buddhist masters such as His Holiness the Dalai Lama, Ling Rinpoche and Trijang Rinpoche, and His Holiness himself.

In 1959, as the Chinese invaded Tibet, he followed His Holiness the Dalai Lama into exile in India. In 1961 he moved to France, where he took up a research and teaching position at INALCO at Sorbonne University in Paris.

He started several Buddhist centers, first in France and later in the Netherlands, Switzerland and Asia. He has been particularly active in teaching Buddhism in Indonesia and Malaysia.