Singapore -- The death of popular Sri Lankan Buddhist monk 73 year old Venerable Maduluwawe Sobitha Thera due to heart failure at a hospital in Singapore earlier this month has drawn attention to the waning “good governance” revolution that he helped to launch at the end of last year. 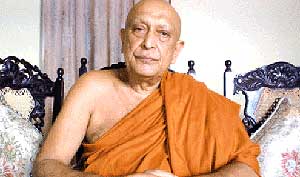 Ven. Sobitha was a socialist and a social justice advocate who used the non-violent style of Buddhist social activism to take on governments when it drifted into dictatorial politics.  He never joined any political party, but the power of his Buddhist sermons twined with political messages attracted a lot of charisma and he was twice instrumental in bringing down powerful presidents.

As a young monk, Ven. Sobitha got his initial inspiration from the 1956 socialist revolution that toppled an English-speaking pro-western ruling elite and brought a reformist government to power that gave the Sinhalese-speaking Buddhist majority their long-suppressed rights.  He came into political prominence in the late 1980s when the then dictatorial President J.R Jayawardena invited Indian Peace Keeping Forces (IPKF) to Sri Lanka, while centralizing power within an executive presidency and suppressing civil liberties.

An excellent orator, Ven Sobitha was able to mobilise peoples’ opposition to Indian intervention, and later on when Jayawardena’s successor President Ranasinghe Premadasa became even more dictatorial and stifled all forms of dissent, he was a long voice that stood against him, until Premadasa’s assassination at the hands of a Tamil Tiger suicide bomber.

“Just like many other Buddhist monks who had an impact on social change in the country, Sobitha Thera too started his rebellious career with nationalism” noted Umesh Moramudali writing in Ceylon Today. “However, unlike many others, he did not stick only to nationalism, but was concerned about many other social and political issues as well. He was direct and had immense courage to stand up against the social injustice despite how strong his opponent would be”.

His social causes included playing a major role in the 1980s against an Education White Paper that would have undermined the free education system in the country.  In recent years, he has campaigned heavily to abolish the Executive Presidency, which he saw as the biggest threat to democracy and freedom in the country.

In 2014, Ven Sobitha again came into political limelight when he offered himself as the sole opposition candidate to challenge President Mahinda Rajapakse who was using Sinhala Buddhist nationalism to consolidate his power and restrict dissent, especially among the Buddhist majority. He formed the National Movement for  Just Society (NMJS) and using his charisma, influence and oratory skills he was able to united a divided opposition, as well as trade unions, rights groups, artistes and academics behind a common candidate, which he was instrumental in choosing.

This candidate was the then health Minister in the Rajapakse regime, Maitripala Sirisena, who defected and challenged Rajapakse for the Presidency as the “common opposition candidate”. After Sirisena won the presidency in a shock result in January this year, Ven. Sobitha became the power behind the throne with considerable clout in directing government policy under a Buddhist slogan of “Maitri Yahapalanaya” (compassionate good governance). However, this policy did not restrict itself to empowering only the Sinhala Buddhists but he strongly advocated reconciliation with the Tamil minority and co-existence with the Muslims. Thus, when he died on November 8th both Tamil and Muslim leaders praised him as a genuine compassionate reformist monk.

Interestingly, he died a heart broken man. Since President Sirisena was elected to office on the “yahapalanaya” slogan to stamp out endemic corruption from the political system, he has seen his dreams shattered by a chain of government actions that seemed as if one corrupt lot of politicians have been replaced by another corrupt lot. The outspoken monk openly criticised the new government’s corrupt practices such as the multi-billion rupee Central Bank bond scam.

The fatal blow to his dreams came after the August 17th general elections when President Sirisena using a constitutional loophole nominated to parliament candidates from his party that have lost the popular vote and named them as ministers in a  National Unity Government. All these candidates served in the Rajapakse regime (like Sirisena) and were tainted with corruption allegations.

Following this action, Ven Sobitha issues a scathing statement under the NMJS banner on the new government’s action. Few hours after it was released to the media the monk was believed to have suffered a heart attack and entered a local hospital. His health has deteriorated since and on November 4th he was taken to Singapore for heart surgery where he died.

In July, after the parliament was dissolved Ven. Sobitha has argued that people involved in corrupt practices with business interests in casino and other gambling, drug dealings, operation of taverns and bars,  should not be nominated as candidates. He told the Sirasa television network that such people are not worthy of peoples’ vote and it is the people that have to provide for their wages and other perks, as well as  a life-long pension if they serve 5 years as a member of parliament.

In an editorial after his death, the Daily Mirror observed that in his vision and mission for “liberative spirituality” Ven. Sobitha believed that religious leaders—while not getting involved in party politics-have a responsibility and moral duty to get involved in politics because “Deshapalanaya” (governing the country) needs to be for the common good of all the people, especially the impoverished or marginalised and not for the rich and ruling elite, to get richer and more powerful.

In a statement issued immediately after his death, President Sirisena said that Ven. Sobitha’s “determination to bring negative political forces that existed in the country to the right path was a great guidance and stimulation for the public commitment to strengthen democracy in Sri Lanka. That inspiration gave us an immense courage to form a good governance government under my leadership to take the country towards the right path”.
But, recalling the final conversations they had with the monk, NMSJ member and unionist Saman Rathnapriya told a media briefing after his body was brought back to Sri Lanka that the Sobitha Thera has told them that “his expectations were shattered and told us to lobby for social and political reforms continuously.”

His passing has resurrected the now largely forgotten issue of abolishing the executive presidency. President Sirisena, surprising many, said in his eulogy to Ven. Sobitha in front of hundreds of thousands of mourners and million watching live on national television that he would do "everything in his power" to make that vision a reality.
The government declared November 12th the day of his funeral a national day of mourning and he was given a state funeral. But, many Sri Lankans from all walks of life mourned that fact that Sobitha Thera has passed away at a time when the nation needed him the most, to keep the corrupt politicians honest.

“In this corrupt, criminalized and communalized political and social environment Ven Sobitha has been a ray of hope and a rare source of inspiration, irrespective of race and religion, to all those who cherish family, religious and cultural values and firmly believe and dream of   a decent government, corruption free administration and a peaceful country where all could live in harmony” said Latheef Farook, a Muslim columnist of the Colombo Telegraph.