Supreme chief of the Nyingma school dies at Bodhgaya

Gangtok, India -- Taklung Tsetrul Rinpoche, the supreme chief of the Nyingma tradition of Buddhism, has died at Bodhgaya in Bihar, sect sources said here on Thursday. 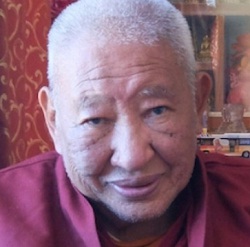 Taklung Tsetrul Rinpoche, who was appointed head of the Nyingma tradition in 2012, passed away on Wednesday.

He received the highest Dzogchen teachings from Polu Khenpo Dorje, a direct disciple of Khenpo Ngakchung.

Born in central Tibet in 1926, Taklung Tsetrul Rinpoche was ordained at the Taklung Tse monastery when he was five years old. He fled Tibet in 1959 with some of his companions, and came to Sikkim where he stayed for two years at Rumtek monastery.

Later, he went to a Tibetan refugee settlement in Shimla, where in the following years he worked with the community, local and state government officials, and the office of Tibetan spiritual leader the Dalai Lama to start a new Dorje Drak monastic seat in exile.

Condoling Tsetrul Rinpoche's death, Sikkim Chief Minister Pawan Chamling said it was a great loss for the entire Buddhist community, especially for the followers of the Nyingma tradition.