Buddhist monk from Loughor hopes to found temple in Swansea

Swansea, Wales (UK) -- A BUDDHIST monk whose training was halted by the death of his father needs help to complete his studies, before he plans to return to Swansea to found a temple. 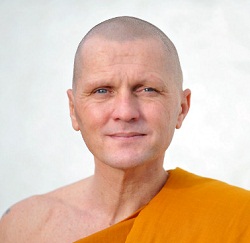 Wayne Eaton has been training in Thailand, but returned to his native Swansea in November when his father became ill.

In the few months since returning home, he witnessed desperation and hardship suffered by many of the worst off people in South Wales, and with that in mind, he is now working to found the International Buddhist Centre Wales, to offer support.

But Mr Eaton's journey to becoming monk Agga Dhammo Bhikkhu is an incredible one — one that has seen him living the high life of showbiz in the States, a hedonistic life running a bar in Barcelona, and even training to become a Rabbi in Jerusalem.

"In some ways that was wonderful, but I never forgot I was from a council house in Wales, and it was nothing compared to the pleasure I get now."

Mr Eaton grew up in Loughor, but after he moved to London to pursue a life in theatre and music, he found himself travelling to America to forge a career as a singer.

A Christian from a child, he found himself becoming disillusioned with the church, and thought he could find what he was looking for spiritually in the Old Testament.

Consequently, he moved to Jerusalem to learn to be a Rabbi.

"I think everybody thought I was mad, as firstly I was not Jewish," he said.

But Judaism was also not for him.

Following that, he moved to Barcelona and opened a musical theatre bar, living the party life, but felt that if that was all life had to offer, it was not worth it.

It was only when he was passing a bookshop and picked up a book written by the Dalai Lama that Mr Eaton found his connection.

"It changed my life," he said.

He decided to move to Thailand, selling all of his possessions in Spain, and pursuing his training.

"The wonderful thing was that everything I learnt or studied I would apply to life," he said.

But then his father, living in Gorseinon, became ill.

"My dad just passed away," he said. "We thought he was going to be around a few more months.

"I came back to help my family to deal with that.

"I left Wales 32 years ago and I thought I would never come back, but since being back I have seen people's need, how many people are involved in drugs and how much suffering there is.

"I have begun to establish a Buddhist centre here in Wales, which has been received with great enthusiasm and interest by a wide range of people, all interested in learning to meditate and find some peace in their often hectic, troubled lives."

Buddhism forbids begging, or even asking for anything other than medication or a drink of water, but as a monk, with no form of income, Mr Eaton is reliant on goodwill to help him fund his trip back to Thailand, so he can complete his training and then return to Swansea to found the temple.

To support him, visit: www.gofundme.com/rkghkcv3