Kathmandu, Nepal -- Dzogchen master Chatral Rinpoche died in Nepal on January 5, at the age of 102. He was one of the last living disciples of Khenpo Ngawang Palzang. 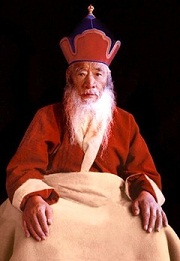 He was a Dzogchen master and a reclusive yogi known for his great realization and strict discipline.  He was widely regarded as one of the most highly realized Dzogchen yogis

In addition to his relationship with Khenpo Ngagchung, Chatral Rinpoche also studied with some of the last century's most renowned masters, including Dudjom Rinpoche, Jamyang Khyentse Chokyi Lodro, and the famed dakini Sera Khandro.

Rinpoche was one of the primary lineage holders of the Longchen Nyingthig, and in particular the lineage that descends through Jigme Lingpa's heart son Jigme Gyalwe Nyugu and then on to Patrul Rinpoche.

He advocated vegetarianism and had a yearly practice of ransoming the lives of thousands of animals in India.

In addition to his emphasis on the union of view and conduct, Rinpoche also stressed the practice of retreat.

In his lifetime, he established numerous retreat centers throughout the Himalayas, including in Pharping, Yolmo, and Darjeeling.

The Benefits of Saving Lives