Colombo, Sri Lanka -- Henry Steele Olcott was born on August 2, 1832, to a pious, Presbyterian family in Orange, New Jersey. On May 16, 1880, Olcott and Blavatsky arrived in Colombo first time and a few days later on May 25, at the Wijananda Temple in Galle, Olcott and Blavatsky observed five precepts. Olcott's second visit to Ceylon was in April, 1881, accompanied by Ven Mohottivatte Gunanando Thera. 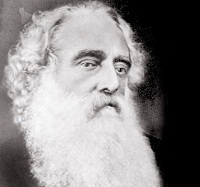 Extracts from Colonel Olcott's Old Diary leaves, describe the beginning of the Theosophical Society in Sri Lanka (then Ceylon).

Wimbridge and Colonel Henry went for a dip in the Galle harbour very early the next morning, but they were followed and watched by crowds, so that it was very uncomfortable to move about. Their rooms were packed with visitors throughout the day.

There was no end of metaphysical discussion with the aged High Priest Bulatgama Sumanatissa, and other sharp logicians.

This old man let Colonel Henry into a nice embarrassment. He begged him to call on a list of Europeans and to write 20 Burghers (descendants of the Dutch) inviting them to join Buddhists in forming a Theosophical Society.

In Colonel Henry's innocence he did so. And the next morning could have bitten off his finger on shame, for they sent him insulting replies, saying that they were Christians and wanted to have nothing to do with Theosophy on Buddhism. Colonel Henry stormed at the old monk for his heedlessness in making him uselessly compromise the dignity of the Society. But he only smiled and made some weak excuse.

It was a lesson for Colonel Henry. During the 15 years that have elapsed since then, Colonel Henry never repeated the mistake. Old Venerable Bulathgama Thera was a particularly persistent disputant, valuable and kind monk.

One evening, they were treated to a devil dancing performance by professional sorcerers, who took part in religious processions. These sorcerers are called in cases of desperate illness to drive away the evil spirits which are supposed to possess the patient. They invoke certain elements by recitations of mantrams and prepare themselves for their function by a certain periods of the moon.

Their dance was a real witch-festival. It leaves behind it a confused recollection of leaping and whirling figures tricked out with hideous masks and streaming ribbons of young coconut leaves of brandished and whirling firebrands, of black masses of oil - smoke of postures suddenly taken, which are enough to send a nervous person into hysterics. One part of the ceremony consists in burning certain herbs and gums on hot coals and inhaling the vapours with gasping sounds, until they shiver as though stricken with an ague, and then fall senseless.

In the coma, they have visions of the observing devils and give directions what to do. They were brought to by sprinkling them with water while a charm was muttered. An educated native gentlemen told Colonel Henry that this dance was considered efficacious for the cure of several diseases, especially those to which pregnant women were liable. They were then said to have fallen under the influence of the 'Black Prince'.

If the devil-dance gets the better of the disturbing evil spirit and it obeys their command to release its victim, it gives a sign of its departures by breaking off a designated branch of some tree near the house. This happened, he told to Colonel Henry, in the case of his own step-mother.

It had been arranged that Colonel Henry should give a public lecture on Theosophy on May 22, 1880. Colonel Henry made desperate efforts to think over his subject and prepare some notes. For he was then quite inexperienced in this business and was afraid to treat himself to extemporaneous discourse. But he might as well have tried to compose an aria in a machine - shop where fifty blacksmiths were hammering on anvils, fifty turning - lathes were whirling, and fifty people were gathered about to criticize his personal appearance, his pen and his handwriting. Their house was a babel, their rooms occupied by friendly mobs from morning till night. Colonel Henry would have done for better to have just gone to the platform without preparation, and trusted to the inspiration of the moment, as he soon learnt to do.

He thinks his first lecture in Ceylon was worth a paragraph, so he had given it. It was delivered in a large room in the Military Barracks, imperfectly lighted, and packed to suffocation.

A temporary platform had seen erected at one end and a figured canopy suspended over it. Besides their delegates there were upon it Ven Sumangala Maha Thera, the Chief Priest Bulatgama, Chief Priest Dhammalankara, of the Amarapura Sect., who had come 28 miles to meet them, and a number more. The whole European Colony (45 persons) were present and inside and outside, a mob of some 2,000 Sinhalese. Colonel Henry was not at all satisfied with his discourse because owing to the interruptions noted above, his own notes were fragmentary and the light was so bad that he could not read them.

However, he managed to get through somehow although a good deal surprised that not even the taking passages elicited applause from the unsympathetic Europeans that was to have been expected, but from the Buddhists. As soon as a passage could be cleared their party passed out, Head Priest Bulatgama and Colonel Henry arm in arm and holding each other tight so as not to be separated by the jostling crowd.

"Was it a very bad speech?" Colonel Henry asked.

"Then," Colonel Henry continued, "why did they receive it in such a dead silence? It must have been very bad."

"What? What? What are you saying," broke in a voice from the Sinhalese gentleman who had got hold of Head Priest Bulatgama in other arm.

"Who said it was a bad speech? We have never heard such a good one in Ceylon before."

"But, that can't be," the Colonel replied, "there was no hand-clap, nor a cry of satisfaction."

He should just have liked to hear one.

He was then explained that the custom was never to interrupt a religious speaker, but to listen in respectful silence and, after leaving to think over what he had said. And he very proudly pointed out the high compliment that had been paid to Colonel Henry in the packed audience hearing him without making a sound. He could not see it in the light, and still thought his lecture was so bad as to be not worth applauding.