Missoula, MO (USA) -- She enters the room and everyone stands. Dozens of bowed heads and hands at heart center decorate her path to a chair neatly set up front. 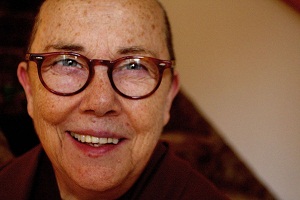 Before she sits, she fluidly moves from her feet to her knees, arms outstretched on the floor towards images of Buddha and the prominent teachers who follow him. For Missoulians, she is one of those teachers.

Robina Courtin is a Buddhist nun, a woman whose life is dedicated to preserving Buddha’s views. She has taught around the world and visited Missoula’s Osel Shen Phen Ling Tibetan Buddhist Center for the last 20 years.

“Robina has a different style of teaching. She is very direct and doesn’t tiptoe around the basic but complex ideas of Buddhism, she hammers away at them,” Fran McDermott, Courtin’s host, said.

Courtin grew up Catholic in Melbourne, Australia. She said as a little girl, she was very attracted to religion.

“I loved going to mass, I liked God. I’d always think about this kind of thing,” Courtin said. “At the same time, I was very rebellious. I didn’t look like a holy kid, you know?”

Courtin attended a Catholic convent, but said at 15, her aspirations shifted from religious to social. She gave up God for sex, drugs and radical politics.

“I think I was always looking for a way to see the world. I went the political way and saw how the world was full of suffering. I was idealistic, trying to make the world a better place,” Courtin said.

Throughout her 20s, Courtin was part of different advocacy groups that fought for the poor, racial equality and women’s rights. After 10 years, she decided she wanted something spiritual again. When asked why she chose to become a Buddhist nun, she said it just happened. She liked the Tibetan way of seeing the world and the Buddha’s view of understanding the mind. It made sense for her to have her life more focused.

In 1996, while editing for Mandala magazine, she received a letter from a prisoner in California. He wanted to know more about meditation. By the end of the year, Courtin had 40 prisoners writing to her. This was the start of the Liberation Prison Project.

Courtin ran the nonprofit project for 14 years. She wrote letters, made phone calls and sent books to prisoners interested in Buddhism. She visited prisons in both the United States and Australia. Courtin said she received letters from about 25,000 prisoners in both countries.

“The people in prison are the ones that have no money, no family, no nothing. In other words, the garbage dump of the world,” Courtin said. “It was so moving that these human beings, who’ve got nothing to look forward to, happily took on Buddha’s tools.”

In 2000, Amiel Courtin-Wilson released “Chasing Buddha,” a film about his aunt’s prison project.

McDermott, who has hosted Courtin for the past five years, said the nun is invited back to Missoula every year because of how powerful her teachings are. Osel Shen Phen Ling center director Bob Jacobson agrees.

“Robina is a very dynamic and clear speaker,” Jacobson said. “Her broad experience allows her to put into words very complex concepts.”

Courtin visits about 60 Buddhist centers every year. She’s also stayed in contact with some prisoners, who she sees regularly. She says if she could teach the world one lesson, it would be to not harm another sentient being.

“For your sake and the sake of others, try not to harm,” Courtin said. “Don’t kill, don’t steal, don’t lie, don’t cheat, don’t jump on the wrong partner - that kind of thing, ok?”