Davenport, CA (USA) -- It was 50 years ago that the Rev. Martin Luther King Jr. was awarded the Pacem in Terris Award in Davenport. 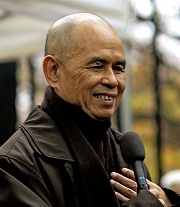 On Saturday, King’s friend, the Venerable Thich Nhat Hanh, founder of Socially Engaged Buddhism and father of the Mindfulness movement in Western culture, was honored with the same award during a ceremony at Christ the King Chapel on the campus of St. Ambrose University in Davenport.

Hanh was not present, but his accomplishments were celebrated nevertheless.

In October, the Rev. Martin Amos, Bishop of the Catholic Diocese of Davenport, traveled to the Deer Park Monastery, in California. The monastery was founded by Hanh, whose followers call Thay, or Teacher.

There, Amos presented the 2015 Pacem in Terris Peace and Freedom Award to more than 100 monastics, who accepted it for the 89-year-old Hanh, who is recovering from a stroke.

During the ceremony Saturday, the audience of 50 learned about Hahn’s work in the Buddhist community during the fighting going on around them. As Steve Spring, an ordained member of the Order of Interbeing explained, the Buddhists could retreat back into their monasteries or help those suffering around them.

In 1965, Spring said, the Buddhists, led by Hanh and his Engaged Buddhism, incorporated the contemplative Buddhists practices with compassionate action.

During the turmoil of Vietnam, the Buddhists faced oppression, including from the regime of Ngo Dinh Diem, who was Catholic. It was in 1963 when a Buddhist monk immolated himself.

“I think this certainly is a healing process,” Amos said after the ceremony, during which he described how graciously he and Katie Kiley of Davenport, who championed Hanh for the award, were received at the California monastery. “He was right in the middle of it all.”

“He’s huge,” Kiley said when asked about supporting Hanh for the award. Not only has Hanh’s devoted his life to peace in the world, she said, “We wanted to show that the Pacem in Terris is open to everyone who is a champion of peace.”

Kiley explained after the ceremony that it was Hanh who asked King to speak out about America’s involvement in Vietnam. That led to King’s 1967 speech at Riverside Church in New York in which he raised questions about the war.

The Pacem in Terris Peace and Freedom Award was created in 1964 by the Davenport Catholic Interracial Council. Since 1978, the award has been presented by the Quad-City Pacem in Terris Coalition. The award honors Pope John XXIII and commemorates his 1963 encyclical letter, Pacem in Terris, or Peace on Earth.