Missoula, MO (USA) -- A basic principle of Buddhist meditation holds that good things rise out of confusion, if you give yourself the freedom not to force them forward. 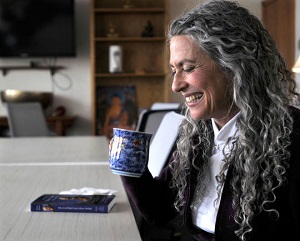 << For several years, Tsomo taught weekly classes in Missoula on meditation. Tsomo calls meditation a bridge between the brain’s amygdala, which controls reflexive or instinctual reactions, and the more complex parts that hold our personalities and memories. TOMMY MARTINO, Missoulian

As Linda Pritzker pursued her interest in Buddhism, that idea propelled her much further than she expected. It transformed her from someone who couldn’t talk about the time of day with her Tibetan teachers to someone who’s authored a book on meditation with a forward written by the Dalai Lama.

“I sort of backed into learning Tibetan,” said Pritzker, who since her ordination as a Buddhist spiritual leader in 2005 is known as Lama Tsomo. “I told myself it was impossible and I can’t do it – and that took all the pressure off. I just wanted to speak some simple words – what’s the weather, what’s for dinner. I didn’t have high hopes.”

But steady experience with teachers and the community of nuns at Pharping, Nepal, slowly built the vocabulary into a working knowledge. Then came the day during a teaching conference when the Skype connection to the Tibetan translator failed, and the impossible became essential. Tsomo found the words falling into place.

“It was the everyday-ness,” Tsomo said. “It helped me understand how we make pathways into highways in our brain. There’s the giving up, the everyday-ness and then the total immersion. Only in this case, it was all accidental.”

Tsomo calls meditation a bridge between the brain’s amygdala, which controls reflexive or instinctual reactions, and the more complex parts that hold our personalities and memories. She said the idea mirrors what she learned while earning a master’s degree in counseling psychology.

“When you walk down a forest path and see something squiggly out of the corner of your eye, you jump,” Tsomo said. “Then you look to see if it was a snake or not. Meditation helps you get that extra moment and bridge to your higher brain functions, so you can get input from your more developed self – your people-brain.”

A similar experience led to the publication of “Why Is the Dalai Lama Always Smiling?” which was released nationally on April 3. For several years, Tsomo taught weekly classes on meditation in Missoula. She struggled to find a book her students could reference for greater background on the lessons she used. Eventually, she thought about compiling the notes she’d developed for leading classes. She initially titled the program “Tibetan Buddhism – Why Bother?”

“I come from a Jewish family where debate is how you explore truth,” Tsomo said of the somewhat irreverent approach her book takes. “We debated at the dinner table every night, and usually ended up throwing napkins at each other.”

David Curtis is also an ordained Buddhist lama and runs the Tibetan Language Institute in Hamilton, one of the largest such language programs in the United States. He said Buddhism has many variations and communities that share common foundations.

“It’s a little like martial arts, where you have tai chi from China and taekwondo from Korea and judo from Japan,” Curtis said, noting that Buddhism has a deep non-violent tradition. “I think what Linda’s doing is part of a wave of Buddhism coming to America. But she’s not writing from the outside looking in. She’s a practicing, meditating Buddhist herself. She’s writing from the inside and sharing it with fellow Americans.”

Buddhist study usually involves a close relationship with a teacher, or “root lama.” Tsomo is a follower of Tulku Sangak Rinpoche, a Tibetan master in the Namchak branch of the Nyingma lineage of Himalayan Buddhism. Rinpoche is the spiritual leader of the Ewam Garden of 1,000 Buddhas in Arlee, as well as Buddhist retreat centers, monasteries and nunneries in New Mexico, California, Nepal, Taiwan and India.

“Beginning with our initial meeting in 1995, she (Tsomo) undertook the study and practice of the Buddhist teachings, including her spending two or three months each year in strict retreat, in addition to maintaining an uninterrupted daily practice,” Rinpoche wrote of Tsomo’s dedication. “On the basis of her efforts, in 2005 I formally recognized lama Tsomo’s accomplishments in an investiture ceremony that took place in conjunction with the graduation of the nuns who participated in the three-year retreat program at my meditation center of Kusum Khandro Ling in Pharping, Nepal.”

The Buddha Garden north of Arlee hosts public events such as the annual International Peace Festival and a weeklong prayer festival. The foundation office in the former Milwaukee Road train station by the Higgins Avenue Bridge handles its more administrative and small-scale teaching duties.

The Namchak Foundation also owns a 8,900-acre property near Hot Springs which someday will become a retreat center for long-term Buddhist study. The facilities represent the resources Tsomo brought to Buddhism from growing up as Linda Pritzker.

In her own website biography, Tsomo acknowledges her “two inheritances.” The financial one stems from her being one of 11 cousins and heirs to the Pritzger family inheritance, which included the Hyatt Hotel empire, TransUnion credit rating service and other businesses. According to a 2011 Chicago Tribune profile of the family finances, “Each cousin is now worth more than $1 billion and has the freedom to launch businesses and adopt causes as they wish.”

The Tribune story noted that several of the Pritzker clan remained in the business world. Others moved into movie and theater production, building a military library and in Linda’s case “found(ing) a Buddhist enclave in Montana.”

“I first came when I was 15 years old on a group camping trip across the country,” Tsomo said. “When we got to Glacier, I really felt this was the place in the world I belonged.”

She was born in Ohio and studied first at Oberlin College and then at Antioch College, where she received a master’s degree in counseling psychology. She said a growing awareness of the similarities between Western psychology and Buddhist mindfulness drew her to more intensive work with Rinpoche. Both use the ideas of archetypes that represent big concepts to focus or visualize the effect an emotion or urge has on a person.

Now 62, she lives on the outskirts of St. Ignatius. Tsomo said the Jocko and Mission valleys of Montana have had a profound effect on her Tibetan teachers. Rinpoche often repeats the story of how he was riding in a car through the Jocko Valley when he had a sudden impression of having been there before. The bowl-shaped horizon of the valley recalled a dream he’d had as a child, and the for-sale sign on a sheep farm just north of Arlee confirmed the serendipitous nature of the experience.

“I was the one driving the car,” Tsomo said. “He was watching over me during my studies, and had said let’s take a drive and see what we see. He didn’t say anything at the time, but he recognized that spot. He said later he had this strong feeling that I’m going to move there.

“The natural world is much more intact here than in so many other places,” Tsomo added. “They don’t find these wide-open spaces in India. At the Namchak Retreat Ranch, we felt very strongly about preserving that. It’s an ideal retreat place, with open views and natural habitat that helps your small mind settle down naturally.”

“He’d been living in India since he left Tibet, and he hadn’t seen snow since he was 15 years old,” Tsomo said. “Tibet is known as the Land of Snows. He stayed and played in the snow for two hours. I couldn’t get him inside. He was laughing and playing.”

That sense of dislocation or relocation pervades much of Buddhism in Montana. Tsomo acknowledges the delicacy of establishing high-profile places like the Garden of 1,000 Buddhas in the middle of the Flathead Indian Reservation.

“Being from a Jewish background, I can identify with that feeling,” Tsomo said. “I moved to the reservation before Rinpoche came. It really struck me how both our peoples had had our land conquered and were doing our best to preserve our culture. Then I realized – I know more Tibetan words than Hebrew words. I was feeling a lot of Jewish guilt.”

In his introduction, the Dalai Lama said he was pleased that Tsomo honored her Jewish heritage while describing her Buddhist personal journey.

“I have never felt the urge to propagate Buddhism with the aim of converting others to my point of view,” the Dalai Lama wrote. “In general, I believe it’s better and safer for most people to stay within the religious traditions of their birth. The world’s faiths evolved in specific geographical and cultural circumstances, which gives them an affinity to the spiritual inclinations and needs of specific communities.”

Tsomo described her progress from an intrigued student to a reluctant teacher with a sense of bemused disbelief. As the book came together, she said she had trouble believing it would have an impact. Now it’s the first of a planned three-book series.

“Rinpoche said ‘I’m not giving you a religion. I’m giving you tools to be a better, happier person.’ And the more I did those methods, the more I realized this really was helping me to be happy.

“Or he ‘laminated’ me – that’s what my kids called it,” Lama Tsomo joked. “It seems like an identity crisis. I’m culturally an American Jew. I’m doing Buddhist practices. This is who I am. My hair won’t go straight. I’m always going to have this Jewish, frizzy hair. But I’ve been comfortable ever since. It just settled.”