Sayasaw U Pandita passes away at 95

Yangon, Myanmar -- Sayadaw U Pandita, the well known Vipasanna meditation teacher and founder of Panditarama Centers, has passed away on the morning of April 16, 2016. He was 95. 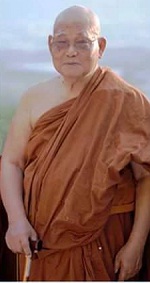 Sayadaw U Pandita has been hospitalized since the middle of March at the Yangon Royal Asia Taw-win private hospital. Two weeks before his death, the venerable was transferred to the Bumrungrad hospital in Bangkok, Thailand, where he had undergone check-ups for pleural effusion and PET scans.

Funeral arrangements are currently under way at Panditarama Shwe Taung Gon Sasana Yeiktha, the meditation centre in Yangon established by Sayadaw U Pandita in October 1990. Students and devotees can pay their respects to Sayadaw's remains at Shwe Taun Gon Sasana Yeiktha until Wednesday, April 20, 2016.

The late Sayadaw's body will then be brought to the Hse Mine Gon Forest Center, some 65 km north of Yangon on that same day.  Funeral rites and the ceremonial cremation will take place on Friday, April 22, 2016, the seventh day of Sayadaw's passing.

The founders of Insight Meditation Society, based in Barre, Massachusetts (USA), Joseph Goldstein and Sharon Salzberg were among his many students.

Sayadaw U Pandita-Bhivamsa entered Mahabodhi Monastery at the age of seven. He became an accomplished Buddhist scholar even before studying meditation under the late Ven. Mahasi Sayadaw.

Sayadaw was a renowned authority in the practice of Satipatthana. He possesses extensive knowledge in both the theory and practice of Samatha and Vipassana meditation.

Sayadaw has served as spiritual advisor to retreat centers, monasteries and Buddhist organizations throughout the world. Since 1951, he has traveled to many countries to lead meditation retreats.

Formerly the head "abbot" of Mahasi Sasana Yeiktha, he was the Ovadacariya Sayadaw (head preceptor, highest position for monks) of Panditarama monastery in Yangon, Myanmar.