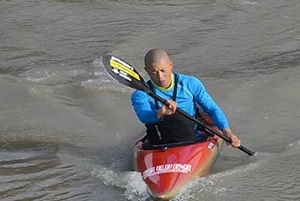 Then, when that's done, he jumps into a kayak, speeds down a river and thinks about nothing but gold ... Olympic gold.

Yazawa is scheduled to be Japan’s representative in the men’s single kayak (K1) slalom at the Rio 2016 Games.

He works as a monk at the Daikanjin temple in Nagano Prefecture, part of the famous Zenkoji temple, which dates back 1,400 years.

After prayers he does admit with a smile, “I haven’t got used to sitting on the heels of my feet (“seiza” in Japanese) yet.”

After serving his daily duties as a Buddhist monk, Yazawa drives for about 20 minutes to the Saigawa river, next to which is a warehouse that stores kayaks.

Although he can only train for about one and a half hours each day, Yazawa says, “It’s important to do as much as I can while enjoying kayaking.”

Yazawa paddles up and down the river. And he loves it.

The 2012 London Olympic Games was Yazawa’s second time at the illustrious event and it triggered his eventual entry into a Buddhist monastery.

He had finished ninth in the men’s single kayak (K1) slalom, the best position in Japan’s Olympic history. However, Yazawa started to “worry about his second career after retiring from kayaking."

He dreamed of marriage and a family, presuming he would not be able to earn his bread and butter solely through kayaking.

Yazawa was not interested in religion. However, a key player who supported his competitive career--Kenei Koyama, the head of the Nagano canoeing association--changed all that.

Koyama was also a chief priest of a temple near Zenkoji.

“Someday, I want to be a person like Koyama who can help athletes with problems,” said Yazawa.

In summer 2013 it all clicked together and Yazawa became a Buddhist monk of Daikanjin temple after training in Buddhism for two months at Enryakuji Temple, the head temple of the Tendai Buddhist sect at Mount Hieizan (revered by Buddhists), east of Kyoto.

In April last year, Yazawa won at the all-Japan canoe slalom tournament and then qualified for the Rio de Janeiro Olympic Games at the Canoe Slalom World Championships the following September.

“Now that I am going to Rio, I want to win at the Olympic Games,” said Yazawa.

Medals might have been beyond the reach of Yazawa at the 2012 London Olympic Games, but you can bet he's praying things will turn out a little differently this year.
TOP