Bodhgaya, India -- One morning in June 2011, residents of the Tergar Monastery in Bodhgaya, India, awoke to find that celebrated the master of Buddhist meditation, Yongey Mingyur Rinpoche, had vanished. 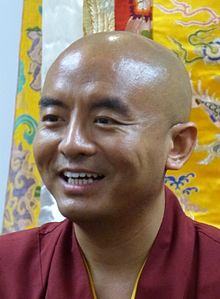 He appeared to have packed nothing, but did leave behind a short letter to his followers. It said that he would be traveling "with no plans or fixed agenda, just an unswerving commitment to the path of awakening."

No one in his community saw him again for four and half years.

Rinpoche was already a major leader in the Buddhist world before embarking on his wandering retreat. He was the leader of a global meditation practice and had been formally recognized as a reincarnated 17th century lama. His mission, then and now, is to make meditation accessible to the modern world. After his years of retreat, he said that he returned as a different person.

At a young age, Rinpoche was inspired to take such a solitary journey by his meditation teachers, including his father. But when the time came, he had a hard time leaving his community behind.

"If I tell them, then they will drag me, you know, 'Don’t go, please!'" Rinpoche said, laughing. "So, I cannot tell them. So then I just leave one day, in the middle of the night."

Although he has been a devout Buddhist all his life, Rinpoche also comes from a well-off family in the Himalayas. Living and begging on the streets of India was a new and difficult experience.

He overcame that embarrassment, but more difficult to conquer was his body’s need for nourishment. Begging was his only source of food, and an unreliable one at that. Rinpoche’s contemplative practice helped him maintain faith that he would survive.

"I tried to meditate," Rinpoche said. "And then, after some time, I have trust, some belief, kind of like, 'Okay, nothing happened today, and something will happen tomorrow, and I can get food.'"

However, after just a few weeks of life on the street, Rinpoche became violently sick. A severe bout of food poisoning brought him to the brink of death. He described the illness as "vomiting and diarrhea for three days. And on the fourth day, I could not move, and I thought, 'I’m going to die.'"

Rinpoche knew that with a single phone call, he could be taken back to his monastery and saved, but he stayed where he was. Looking back on the decision, he laughed deeply and said "suicide mission," adding that in that moment, he chose to remain open to the idea of death.

"I just let it go," he said. "Whatever happens, happens. You can learn until the last breath. So death is the best adventure in our life!"

Now firmly believing he was about to die, Rinpoche entered a state that he called "resting (his) mind in open awareness." He couldn't see, hear or move, but his mind became utterly clear, free of what Rinpoche calls "the monkey mind," the clamor of ordinary thoughts and worries.

"Like blue sky without clouds, and sun shining," he said. "There’s no time. This monkey mind is gone. At the same time, I know … but it was knowing without thinking. And that experience was so precious, so blissful, so joyful. And I stayed there within that state, somehow, maybe four or five hours."

As the sun began to rise, a new feeling came over Rinpoche: it wasn't his time to die. He regained his health and set out into the mountains, living in caves and eating wild vegetables and mushrooms. It was during this period that he realized how his near-death experience had changed him.

"Staying in a cave was so nice for me," he said. "After I have this almost-die experience, everything’s okay. I can stay everywhere."

Before this experience, even though he'd been meditating for a long time, Rinpoche said he still struggled to let go, which is called grasping.

"Then after that, I’m so happy," he said. "I have so much gratitude, so much appreciation for just being. Just seeing. Just hearing. Just experiencing."

It's this lesson of the joys of simply being present that Rinpoche has integrated into his teachings across the world.

People should view meditation more in the context of their daily lives, not as some esoteric ritual, Rinpoche said.

"One minute in the morning helps all day," he said.
TOP