Maumelle, AR (USA) -- To the right of Anna Cox's front door on Crystal Mountain Drive in Maumelle was an altar of sorts. Bare tree limbs crisscrossed about half a foot deep to form a rectangular foundation. Smooth, round stones lay on top. More stones were in an arrangement to the left, coupled with earth-tone foliage. 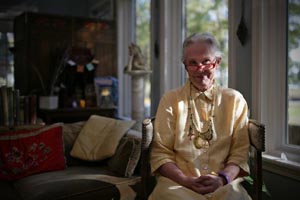 Inside the house, Cox sat on an antique couch in a room with floor-to-ceiling windows that streamed sunlight, the Arkansas River gleaming in the distance. Another altar, this one with a statue of Buddha in the center, the sage on whose teaching Buddhism was founded, sat in the corner behind her left shoulder. Silence abounded.

Cox, 72, was dressed in a jade jacket with oriental designs, her large, red-framed eyeglasses perched on the tip of her nose. She lifted a cup of hot water to her lips.

Her long, silver hair twisted at the nape of her neck, Cox's countenance was gentle, her serene smile ever present.

"This is my life now," she said, sweeping her arms to take in the home and her husband, Jim Rule, seated in a chair next to her. "My purpose out in the world has come to an end."

Thursday will mark the celebratory end to Cox's sojourn as the leader of Compassion Works for All, the state's only Buddhist prison outreach organization.

Cox was also one of the founders and primary teachers at the Ecumenical Buddhist Society of Little Rock, now located across from the state Capitol.

Morgan Holladay, executive director of Compassion Works for All, first met Cox about three years ago when Holladay's graduate professors recommended that she intern at the prison outreach organization.

"That's when I realized that I would be working with 'the' Anna Cox," Holladay said. "She is famous in the Arkansas Buddhist community, and I had heard about her work for many years when I lived in Fayetteville."

Cox, a licensed psychotherapist, began practicing in Little Rock more than 40 years ago, first at the Arkansas State Hospital and then as a social worker with Little Rock public schools before going into private practice.

She spent time making home visits in Little Rock neighborhoods rife with gang violence. It was there, Cox said, that she made connections that would come full circle.

She laughed as she remembered how in the early 1970s she would pull up to the Granite Mountain neighborhood in Little Rock in her "little beat-up Volkswagen" and the kids would rush out their front doors to greet her or stand on the porches and wave.

"I never for a moment had any sense of concern of 'What am I doing out here in Granite Mountain?' It felt like I had this whole army of street-smart kids who were all watching to make sure that when I came out of so-and-so's house that I got to the next house," Cox said. "Then they'd all come follow me to the car to say goodbye. They were kids just so eager to learn and grow. I'm sure they had enormous obstacles facing them already at 15 years old."

Her eyes shifted downward as she recalled coming face to face with some of those same children when she began working in the prisons.

"When you're working with people doing therapy, there's a very profound way they become family or children for you," Cox said. "And that never leaves, even if you never see them again. There's a way that everybody is always with you. In that funny way it was like, 'Oh, I'm so glad to see you again,' when I saw them in prison. Not so much the place or the life circumstances, but that connection kind of transcends circumstances. And it's more just 'Here we are, connected again. Isn't this something?'"

Her journey into the cells of the state's most hardened criminals began in 1993 when she received a letter from death-row inmate Frankie Parker, asking her to help him prepare for his execution.

On drugs and distraught over his divorce, Parker in 1984 shot to death his former in-laws, James and Sandra Warren of Rogers. He wounded his ex-sister-in-law and kidnapped and wounded his ex-wife, Pam. In a standoff, Parker shot at and wounded a Rogers police officer.

He was convicted twice and sentenced to die by lethal injection.

It was while Parker was in solitary confinement for numerous violations that a guard tossed him a copy of Dhammapada, a book of Buddhist teachings.

Cox met with him often to teach meditation and the fundamentals of the belief system. Parker's immersion in Buddhism evolved so profoundly that he became a teacher to fellow prisoners and led meditations.

Before he was executed Aug. 8, 1996, many around the world reached out to Parker, rallying to stop his imminent death. The Dalai Lama pleaded for his life, and actor Richard Gere petitioned to visit Parker in his last days.

The state's Buddhist population flocked to visit him, and the outreach spread to other inmates, evolving into Compassion Works for All as it is today.

A few years after Parker's execution, Cox became a certified religious assistant for the state Correction Department. This allowed her to meet one-on-one with the inmates in their barracks and to see them through to their eventual death.

Joshua Mayfield, the Correction Department's religious services administrator, said Cox is a role model for her work in the prisons.

"She is one of the most genuinely compassionate people I've met," Mayfield said. "Anna has been volunteering in multiple ADC facilities for well over 20 years and has always been willing and eager to help in any way she can, with any inmate or group she can."

Cox was with Eugene Perry when he was executed Aug. 6, 1997. Perry was sentenced to die for the murder of Kenneth Staton and his daughter Suzanne Staton Ware during a jewelry store robbery in 1980. He maintained his innocence up to his final words.

Cox has counseled and taught dozens of death-row inmates, including Damien Echols, one of the "West Memphis Three" who were tried and convicted of the 1993 murders of three boys. Echols, along with fellow defendants Jessie Misskelley Jr. and Jason Baldwin, was released from prison in 2011 because of DNA evidence.

"So many of the inmates were already starting to do meditation and other learning and growth skills because people like Frankie Parker, Gene Perry and Damien Echols at the time were teaching and supporting each other in all of these awareness skills to grow and heal," Cox said. "There are amazing stories of mutual support and care among those men. It is a different world there today, but back then they would trade books and teach each other."

When asked how she responds to critics who say inmates are not deserving of her compassion and time, Cox said she knows the fear and anger that comes from being a victim of a violent crime.

In 1987, as she walked on a Hawaiian beach, she was brutally attacked in an attempted rape and was held hostage for hours as she was choked and beaten. She barely survived the attack and endured post-traumatic stress for years afterward.

She found healing in her Buddhist beliefs, which include the transcendence of judgmental mindsets of what is good or bad, right or wrong, and encouraging victims to look for the lesson in the pain.

"One of the concepts in ancient wisdom traditions, inherent in everything that arises in our lives, is a vehicle, or an opportunity, to grow and heal," Cox said. "This moves us more into, 'Yes, this caused great suffering, but how do we now bring healing to the past?' We look deeply into what happened so that we can understand the teaching inherent in the event, and thirdly, we ask ourselves, 'How can we use the wisdom that we grow from deepening our understanding?'"

Cox said she also has an obligation to act when she sees harm being done and to help someone transcend the obstacles that are leading to their harmful behavior.

"I've never met anybody in those prisons who, when they could feel safe enough, was not just so longing to be seen and known for the best of who they were," Cox said. "And who felt regret, horrible regret and shame, for things that they might have done to get them there. But in their heart, they want to heal."

She said she considers her time in the prisons a privilege that made her wiser.

"It taught me unequivocally to see that there is not a person anywhere who does not long to be fully themselves and to be seen as good and who wants to do good things," Cox said. "Their pain was too great, too much of an obstacle and too much of a disruption to them since birth or even since in utero. They just never had much of a chance, or encouragement, support or love to grow beyond the obstacles that were just too much for them to overcome."

Cox clasped her hands together and smiled when asked about her retirement plans. Her activism and spiritual seeking have taken her all over the world. She fought for civil rights in Arkansas when she was 19; was taught by the Dalai Lama; has been on pilgrimages to sites of horrific tragedies, such as Hiroshima, Japan, and the Auschwitz concentration camp in Poland; and cared for leprosy patients with Mother Teresa's Kalighat home for the dying in India.

Now, Cox said, is a time for meditation and self-care. An illness two years ago damaged her pancreas, leaving her an insulin-dependent Type 1 diabetic. The severity of the condition progressed to where she is now mostly housebound.

"The door has been closed because I simply don't have the capacity to go out in the world. We often give ourselves the assignment we least want to do by closing every other door. So for me, all those doors got closed with this illness," Cox said. "The only thing I've got left to do is to meditate, walk and reflect on the teachings of nature, wisdom and compassion. And to practice getting ready to let go of everything, the ultimate nonattachment.

"I am preparing for the next step, but I'd like to wait as long as possible to take it."
TOP