Cardiff, Wales (UK) -- A Buddhist monk has rubbed shoulders with some of Hollywood’s biggest movie stars after being commissioned to teach the meditation technique mindfulness. 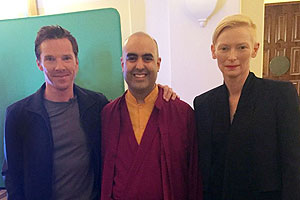 Gelong Thubten, director of the Samye Foundation Wales, was asked by comic giants Marvel to work with the lead actors on the set of blockbuster hit Dr Strange.

The monk built up a close friendship with the film’s two top stars, Benedict Cumberbatch and Tilda Swinton, who spent many hours perfecting the power of mindfulness between takes at the film studios in London.

And he made such a big impression that he flew to Los Angeles with the cast to talk about the technique on the red carpet at the world premiere.

Speaking from the Samye Foundation’s base on Cowbridge Road East in Canton, Cardiff , he said: “It’s quite unusual for a Buddhist monk to end up in Hollywood, but it was a very enjoyable experience.

“Dr Strange is a film which has very strong themes around mindfulness, so Marvel asked me if I’d be able to come to the set and get involved.

“When there were breaks in the filming I’d get the actors together and we’d practice mindfulness, which prepared their mind for when the cameras started to roll again.

“It was an interesting challenge to practice mindfulness on quite a noisy set with 400 crew members rushing around.

“But Tilda and Benedict are into their mindfulness anyway and wanted to take their training even deeper.”

Thubten, who does all his work voluntarily, said Dr Strange provided him with a unique opportunity to promote mindfulness to a wider audience.

“The film presents the idea that you can create your reality with the power of your thoughts, and that the mind has limitless potential,” added Thubten, who became a Buddhist monk 24 years ago and spent more than five years in strict retreats.

“Typically, a superhero is someone who has strong physical powers, but this film is about mind power.

“Now, I’m not saying that people can actually open portals into other worlds in real life. Dr Strange was a fantastical dramatisation of something which is very real.”

Mindfulness, which has been in existence for 2,500 years, has been proven to train the mind to respond better to stress and develop greater clarity.

“It’s about focusing on the present moment, feeling less controlled by your own thoughts and having more mental freedom,” added Thubten, who travels across the globe to teach mindfulness.

“It doesn’t mean blanking out your mind. People think it’s about going into a trance, but it’s not.

“It’s about dealing with your thoughts more creatively.”

In addition to his work with Hollywood A-listers, Thubten has also travelled to businesses, universities, secondary schools, rugby clubs and even prisons to teach mindfulness.

“At times I feel mindfulness is a little bit too focused on the self, so it’s also important to look deeply at the importance of empathy and compassion.”

The Samye Foundation Wales is set to expand its Cowbridge Road East branch to include a larger meditation room and even a tea room. It also has a centre in Caerphilly.