Ladakh, India -- ‘Peace keeping force’ is the joke of century. Peace can’t be achieved with any force, but unconditional love, great compassion and tolerance can bring peace. 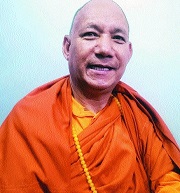 << Sanghasena the monk of international repute was talking to ‘The Hitavada’ at the office of Awaz TV Channel in Bajaj Nagar on Sunday.

In the era of competition, when the nations are in the race of producing weapons of different kinds to establish their superiority over each other, the universal ‘explosion’ of ‘Mahakaruna’ (great compassion) is needed to bring peace in the world, said Venerable Bhikkhu Sanghasena, founder of Mahabodhi International Meditation Centre (MIMC) in Ladakh.

“The whole world is on the verge of destruction. The problems of present world could be classified in two categories. The world is witnessing lot of terrorism, violence, war, division in the name of castes, creeds, colours, religions on one hand. While on the other hand the so-called intelligent people have made mess in the world. They have spoiled the universe due to deforestation, global warming, weather change, pollution of water, air, vegetables, agriculture, soil, rivers, sea and even the space. These problems are result of greed associated with ignorance. In other words, ignorance is at the centre of greed, violence, hatred, aggression etc.,” Bhikkhu Sanghasena pointed out.

Bhikkhu Sanghasena is known as ‘maverick monk’ by his followers. He is instrumental in transforming a vast 250 acres of deserted barren land into an oasis of learning campus bustling with diverse activities, which land hopes to thousands of underprivileged families. In a Buddhist’s monk world; he is an anomaly, who is not confined to monastic life has set out to transform and brighten lives of hundreds, especially the girl child. He serves as a guiding force and a beacon light to needy family.

Bikkhu Sanghasena elaborated, “If the entire world would understand the teachings of Buddha, then there would be a hope to save the entire humanity. Lord Buddha had explained the root cause of all problems in two words - greed and ignorance. ‘Universal compassion’ should be re-established through Buddha’s teachings.

MIMC has set a mission to spread the message of universal compassion across the world. MIMC has started conducting Mahakaruna Day programmes. The programme in Nagpur city at Deekshabhoomi was fourth one after Ahmedabad, Delhi and Mumbai. The next programme will be in Amravati in Andhra Pradesh, and this city should be developed as capital of compassionate people.”

The life journey of Bikkhu Sanghsena is very interesting and inspiring. It’s the journey of how a soldier has transformed from guns to peace. Born as Tsering Wangchuk in 1958 to a religious Buddhist family in Timisgang in Ladakh, he was curious and inquisitive about everything in life. His father was a traditional medical practitioner. When he was 17, in 1975, he joined Ladakh Scouts, Indian Army. He was the youngest in the whole platoon, and he developed a strong sense of discipline and responsibility which helped him shap his life.

When asked whether only ‘Buddhism’ is the only solution for establishing peace and harmony in the world? Sanghesena explained, “I said, teachings of Buddha are the hope for humanity not ‘Buddhism’. Here, people always get confused with Lord Buddha and ‘Buddhisim’. For me, Lord Buddha, Jesus Christ, Mohammad Paigambar, Lord Ram and Lord Krishna were spiritually enlightened masters. They should be considered as Sun and Moon which help nature blossom. People, due to ignorance, have confined themselves in the boundaries of religions, sects, traditions, customs, faiths etc. People are ignorant because they follow them without understanding the ‘universal principles’ they taught the world. People of all religions are busy in rites or rituals and Buddha’s meditation techniques to go inward to know thyself should be followed.”

Stating ‘outer world is reflection of inner world’ Bhikkhu Sanghasena said, “It is the mind which has created all conflicts and crisis in the world. Instead of practicing rites or ritual due ignorance, people should study, contemplate, meditate and practice of spiritual laws, ethics and meditate for purifying self and developing inner wisdom, the entire world will change.”

Bhikkhu Sanghsena took the advancements and technical developments in positive spirit. He said, “Lord Buddha had defined ‘Nibbana’ as total eternal bliss. The un-conditional, un-measurable, un-exhaustive eternal bliss. In ancient times, one has to go to forest, travel long distance to find spiritual master. But in the modern world, which has been dominated by materialism, a person has given a great opportunity by modern gadgets, to contact with any spiritual master of his choice. Practice the teachings of that spiritual master and follow the path of self-evolvement. Unfortunately, the new technology has been used by people to spread unwanted qualities not suitable for humanity.”

Lord Buddha represents entire India and many spiritual masters of modern world have included his teachings in their discourses. They may not take the name of Lord Buddha, but they are following the path towards ‘Nibbana’, he concluded.
TOP