Seoul, South Korea -- Some people, if you ask them a question, answer quickly. Others take a moment to think first. Haemin Sunim looks up, slightly to the right, and allows 14 seconds to pass before he answers one of my questions. I counted, when I listened to the recording. And here’s something: waiting for his reply, I didn’t feel even remotely uncomfortable. Because taking time is Sunim’s thing. He’s a Buddhist monk who has become internationally famous for it. 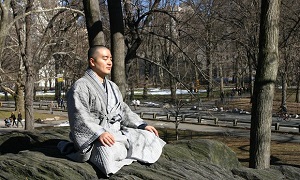 His book Things You Can See Only When You Slow Down was published in South Korea in 2012, quickly rose to No 1 on the bestseller list and stayed there for nearly a year, selling more than 3m copies. Written in response to requests for advice on social media (he has 1.25 million followers on Twitter), it directly addresses problems facing people around the world. Some of this is based on his personal experience. Much is based on what he has learned from people who ask for his help.

“I come out of a tradition of Zen Buddhism, and I practise meditation. I give lessons. The formal teaching is Buddhist doctrine and teachings. But in the temple, when people come in to pray, you might have coffee or tea, and the conversation is not usually about spiritual matters but about mundane, everyday life. I ask for questions. And often the questions are not about meditation but about daily struggle. What do I do to solve this problem, or that problem? Very specific. I try to offer my own answers.”
Korean Buddhist monk Haemin Sunim in New York.

Many of the questions are about family life. “I encourage people to have a very intimate and close relationship with their child, when the child is one, two, three, four and five. You should pour your attention and love into them. But when the child has grown up, it’s different. Often parents are so much in love with their child that they want to do everything – even when the child is in their 20s. I say, ‘Maybe you can let your child know that he is already an adult. Say, “I love you very much but it’s time for you to grow up.” Focusing less on him, and more on yourself, your partner, and the people around you, will bring benefits to your child.’”

This was Sunim’s experience. “I feel very lucky. My mother cares deeply about me, but is very happy with her own life, and doesn’t have any need to control me. I was in my mid-20s when I realised. I have a cousin, and like me he went abroad to study.” (Sunim moved to the US to study film, then found the religious life.) “My aunt would always pack everything – food, clothes, everything – and follow him to the airport to say goodbye. And I realised that my mum didn’t do that. Sometimes she didn’t even come to the airport! Not that she didn’t love me. She loved me very much.”

Did you ever tell her?

“Yes, I told her how grateful I am. She is a very happy person. The best gift you can give to your child is to be happy yourself, rather than trying to make your child happy.”

Sunim grew up in Seoul, South Korea and has a younger brother. The family was poor, he says. “Especially when I was in elementary school, but I always felt a sense of love.”

His mother is a housewife. His father sells art. “He has a tiny shop selling paintings. Other people’s paintings.”

Sunim was always interested in spirituality, he says, and the meaning of life. “What happens after we die – that sort of thing. So when I went to bookstores I would pick up those books. I started in high school, with a book that profoundly influenced me by Krishnamurti. There are so many wonderful books by him. I thought it was very interesting. That genuine freedom is freedom from your own thoughts. That was such a powerful teaching. I always thought of freedom as something to do with politics.”

What can he tell people who didn’t have a happy childhood?

“I get a lot of questions like that.I offer different ways to heal yourself. If you have the issue of abandonment, you feel that your parents didn’t care much about you, you were the middle child, or the last child, or your family was very poor and your parents were always very tired when they came back from work … Having your own child can become a way to heal yourself,” he says. “I have heard a number of times that caring for a child, and giving the kind of love you never received, can be transformative and healing for yourself,” he says.

And people who don’t have a child? He thinks for a while. “You can offer the love you haven’t received by doing volunteer work, perhaps in an orphanage. I heard from somebody who volunteered, and frequently washed the babies and children in an orphanage, and she always felt incredibly happy, and connected. So I think you can heal yourself by giving the love that you haven’t received from your own parent.”

Do you think families pause enough? Or is it always a fight to be heard?

“Usually, it’s a fight to be heard. When we pause, we can connect to our body, and to the person in front of us, instead of being wrapped up in our own thoughts.” One reason we don’t do that, he says, is sheer busyness.

“People have to work for many hours and they are sacrificing their health to make money. And because of the net and cellphones, people are losing their connections to family members or friends. They’re always online, so on your birthday, you get 50 birthday messages and realise you have nobody to have dinner with. And that’s very common.

“It would be great if we could gift to ourselves a moment of calm and quietude, to find our own centre, and go out and live more intentionally, rather than being pulled in many different directions and getting sucked in, and losing control,” he says.
Advertisement

What are the most useful pieces of advice you can offer families?

“I think that a lot of mothers, with a full-time job, carry a sense of guilt, about not spending enough time with her child. My advice would be to think that quality matters more than quantity. So even if it’s a very short amount of time, shower your child with your full attention and loving care,” he says.

“That intimacy can have huge benefits for the child, compared with being there but being stressed and annoyed and anxious that you have to get away. A lot of mothers, they get depressed because they don’t feel they have enough time. But maybe because you are working, you feel a little more fulfilled. And with that, you can bring positivity to your child.”

“I also get a lot of questions about husband-and-wife relationship problems. If your child is emotionally upset, it could be because the husband didn’t pay enough attention to his wife. So being kinder to your wife can help your child to have balance.”

Does that kind of teaching usually arise in response to husbands?

Do men seek your advice as well? “Usually the husband tells me, ‘My wife nags, she tries to control me, she tells me: “Do this, do that, you’re not good enough.”’ So I jokingly tell my female audience, ‘You thought before you got married that you would be able to somehow change him, and you now know how impossible that is. And a part of love is acceptance, rather than trying to change your husband. To a certain degree, we have to reconcile and accept differences.”

You said something like that earlier, about your mother not trying to control you …

“That’s one of the lessons that I try to share. When you are trying to control people, you feel that something is missing within you, and you want to find somebody else who can give you the things that you need. And in the process, you want to control that person. But often you can just go out and get that which you have been longing to have, rather than use other people to get it,” he says.
Advertisement

What did you see, and hear, that made you know that you were loved as a child?

“Well, my parents would sacrifice financial means to give me the best education. I felt that they were willing to invest their resource into me. And when I was with them, they asked many questions. Questions about how I’m doing, how I’m feeling. And whenever I write something, my mum collects my newspaper columns. She talks about whether this week’s column is good, or not so good. She’s definitely interested in my writing.”

So it’s something to do with having their attention? Not lots of hugs and kisses? Sunim shakes his head.

Do you have a stone in your living room? “Hahaha! No!”