A Science Writer Embraces Buddhism as a Path to Enlightenment

OM’S LAW: To the extent that Buddhism encourages its practitioners to cast aside the self on their way to enlightenment, it can seem like a fool’s errand. The self isn’t so easy to shed, as Buckaroo Bonzai noted: “No matter where you go, there you are.” 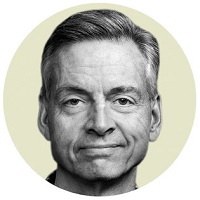 But that doesn’t mean there’s no wisdom to be found in the effort. The journalist Robert Wright - a practicing Buddhist who often explores the intersection of science and religion, as in his 2009 best seller “The Evolution of God” - makes the case for a Zen lifestyle in his latest book, “Why Buddhism Is True,” new at No. 4 in hardcover nonfiction.

Wright has been a spiritual seeker for a long time. In 2002 he founded a video site called MeaningofLife.tv, in which he talked to various people “about matters relating to (wait for it) the meaning of life.” He’s still editor in chief, and last month participated in a conversation posted there with the Buddhist author and emergency room doctor Daniel Ingram.

The video, which touches on everything from current politics to Buddhist sociopaths to Wright’s own level of spiritual attainment, offers an endearing look at Wright fumbling toward ecstasy. It also suggests that meditation can echo more pharmaceutical paths to enlightenment.

“On my first retreat I had an experience that bordered on hallucinogenic, that had to do with viewing the interior of my mind,” Wright says as Ingram beams an encouraging, euphoric grin his way. “And at first I was, like, ‘Whoa.’ I mean, this is my first retreat, right? And at first it’s like red and purple and I’m like: ‘Whoa. This is a new place.’ And then, what I observed was actually in a sense that thought, except that, for the first time, what it looked like was one entity saying it to another, and I realized it was kind of like the inside of my mind. … I don’t actually consider that the most interesting proximity to not-self that I’ve had. But anyway, there is that.” Such experiences, he added, can “convince you that our ordinary way of seeing things is pretty deeply confused. You have apprehensions that are quite different from your ordinary way of experiencing things. Like - and this is another version related to not-self - you’re meditating on a retreat, and you feel that the tingling in your foot is no more a part of you than a bird that’s singing, right?”

“Actually,” Wright interrupted, “this may have just been a tingling in my foot. I don’t mean - this may not have been a special tingling.”
TOP