Sulak Sivaraksa, 85, faces 15 YEARS in prison for questioning whether a king's duel fought on elephant-back 400 years ago actually happened

Bangkok, Thailand -- An 85-year-old man faces 15 years in jail after asking Thais to think critically about whether one of the country's king won a duel on elephant-back in 1593. 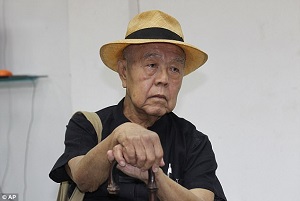 << Police escorted social critic Sulak Sivaraksa (pictured) to a Bangkok military court today, where he was officially charged with insulting the monarchy

Police escorted social critic Sulak Sivaraksa to a Bangkok military court today, where he was officially charged with insulting the monarchy.

The case stems from remarks Sulak made in 2014, when he told a public forum to think critically about Thai history and questioned whether renowned monarch King Naraesuan had really won the Battle of Nong Sarai over 400 years ago by defeating a Burmese prince in solo combat while mounted on a war elephant.

Sulak, who walks with the aid of a cane, said he had no idea why the case was going ahead now, so long after his speech.

'Perhaps they don't like me because I never close my mouth,' he said.

'I speak the truth. I believe in the Quakers: speaking truth to power.

Lese majeste, as the offense of insulting the monarch is known, is punishable by three to 15 years in prison.

The law only mentions the top members of the royal family, and doesn't appear to mention dead monarchs, but in practice the rules are often more widely interpreted.

Sulak's lawyer, Puangtip Boonsanong, said it was 'up to each individual's interpretation' over whether dead kings were protected by the lese majeste law.

At least 93 cases of lese majeste involving 138 people have been prosecuted since Thailand's military seized power in 2014, according to the legal aid group Thai Lawyers for Human Rights.

Rights groups say the government's actions are a way of silencing critics and cementing political control.

Puangtip said Sulak would fight the charges against him. He is scheduled for another meeting with prosecutors December 7.

The development in the case comes little more than two weeks before the funeral of King Bhumibhol Adulyadej, who died a year ago.

The country is busy making preparations for what will be huge and elaborate national event, and pro-royalist feelings are at a height.
TOP