Eido Shimano, Buddhist Leader Who Resigned in Scandal, Dies at 85

New York, USA -- Eido Tai Shimano, who as abbot, or head spiritual teacher, of the Zen Studies Society in New York established a substantial following for his branch of Japanese Buddhism, only to resign in a sex scandal, died on Feb. 18 in Gifu, Japan. He was 85. 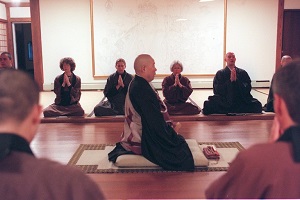 His death was announced on the society’s Facebook page. No cause was given. The notice said he had just given a lesson at a junior college.

Mr. Shimano helped fuel interest in Zen Buddhism in New York and beyond in the 1960s and ’70s, a time of alternative lifestyles and spiritual searching. But years later it was found that he had also been having sex with a number of women who had come to him to be taught, revelations that raised ethical questions that roiled Western Buddhism.

Although Mr. Shimano continued to have devoted followers after the scandal broke in 2010, he became a pariah to many.

Mr. Shimano was born in Tokyo in 1932. His given name was Eitaro; he adopted Eido — his so-called Dharma name — when he became a monk. He practiced the Rinzai Zen school of Japanese Buddhism, which emphasizes seated meditation, among other characteristics.

Mr. Shimano went to Hawaii in 1960 under the sponsorship of Robert Aitken, who had established a Zen center there. In late 1964, Mr. Shimano relocated to New York.

According to “The Zen Predator of the Upper East Side,” an investigative e-book by Mark Oppenheimer published by the Atlantic in 2014, Mr. Shimano was pressured to leave Hawaii as a result of questionable behavior with two female Zen students.

Mr. Shimano’s own story of his relocation was more charming. He told of arriving at John F. Kennedy International Airport on New Year’s Eve with virtually nothing and proceeding over the ensuing weeks and months to attract followers in the most basic of ways.

“All I did was simply walk Manhattan from top to the bottom,” he told Mr. Oppenheimer, a former religion columnist for The New York Times, adding, “in my Buddhist robe.”

“Every single day I picked up two or three people who were curious,” he said. “And that was the beginning of the sangha” — his community of followers.

He quickly became the abbot of the Zen Studies Society, a Manhattan organization that had been founded in the 1950s but was not particularly active by the mid-’60s. Among his growing group of followers were well-off people like Dorris Carlson, a philanthropist who provided much of the money that enabled him to create the Dai Bosatsu Zendo, a monastery opened in 1976 on 1,400 acres in the Catskills.

Countless people made the trek there to meditate, study and be taught. Rumors that Mr. Shimano, who was married, was having sex with some of those who had come to him for enlightenment circulated for years, so much so that Mr. Aitken tried to raise concerns.

“Over the past three decades, we have interviewed many former students of Shimano Roshi,” he wrote to the Zen Studies Society board in 1995, using the Japanese honorific that means teacher. “Their stories are consistent: trust placed in an apparently wise and compassionate teacher, only to have that trust manipulated in the form of his sexual misconduct and abuse.”

The matter flared into the open when, at a group dinner at the Catskills monastery in 2010, a woman rose and announced that she had been having an affair with Mr. Shimano for two years. Until that moment, some board members had thought that any questionable behavior by Mr. Shimano had been in the distant past.

He resigned from the board in July of that year. Two months later, he resigned as abbot as well.

“Over time, I took your kindness for granted and arrogance grew in my heart,” he wrote in a letter to his followers at the time. “As a result, my sensitivity to feel the pain of others decreased. Now, as I reflect on the past, I realize how many people’s feelings and trust in me were hurt by my words and deeds.”

The scandal, along with similar ones involving other Buddhist leaders, like Joshu Sasaki, prompted debate about what standards, if any, should be applied to Buddhist teachers, the difficulties in adapting Eastern ideas to the West, and whether the dynamic between teacher and follower is inherently coercive.

“Eido Shimano Roshi was clearly one of the great Zen teachers of his generation of immigrants who fed the hunger in the American counterculture for an ‘authentic’ teaching from the East,” Mr. Oppenheimer said by email. “Unfortunately, he was also one of the generation’s worst predators.”

When the allegations about him, Mr. Sasaki and others came to light, people spoke out — a “me too” moment before that phrase came to be associated with sexual abuse. “But many Buddhist communities are still organized around the principle of the charismatic master,” Mr. Oppenheimer noted, “and that’s so often a recipe for abuse.”

There was no immediate information on Mr. Shimano’s survivors.
TOP