Dr. G.P. Malalasekera, founder of the World Fellowship of Buddhists (WFB) honoured at its 29th General Conference in Narita, Japan

Narita, Japan -- A brief talk on Dr. G.P. Malalasekera, founder of the World Fellowship of Buddhists (WFB) was delivered on November 8, 2018 by Mr. Senaka Weeraratna (Hony. Secretary,German Dharmaduta Society) at the First Plenary Session of the 29th General Conference of the WFB, held at Narita, Japan from Nov. 7-9, 2018.

Here is the text of the Speech: 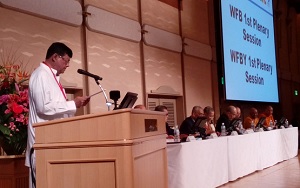 Mr. Chairman, Most Ven. Sirs, Ven. Sirs, President of the WFB, General Secretary of the WFB, Distinguished Guests, Brothers and Sisters in the Dhamma.

I am indeed privileged to be invited to say a few words in honour of Dr. G.P. Malasekera, the founder and First President of the World Fellowship of Buddhists.

Gratitude is a noble quality. It is also a rare quality. In the Anguttara Nikaya the Buddha identified Gratitude as an ennobling quality.

On this occasion we must express our gratitude as a foremost duty to Dr. G.P. Malalasekera, who is the father of the WFB. His legacy to the cause of advancement of Buddhism by bringing Buddhists of various schools of thought and shades of opinion under one canopy is a stupendous achievement.

Dr. Malalasekera saw elements that unify Buddhists despite differences, and being a visionary, he saw light at the end of the tunnel, that may not have been visible to very many others. He worked tirelessly with the support of the All Ceylon Buddhist Congress (ACBC) of which he was Chairman for 23 years, and other Buddhist groups, based locally and internationally to realize this vision. This gathering here today marks the fruit of his vision.

It is appropriate that we commemorate Dr. Malalasekera almost on the eve of his 119th birth anniversary which falls on 9th November, 2018 (tomorrow). He was born on 9th November 1899.

His father, an Ayurvedic Physician, named him as George Peiris, being the first two names given to him. However these English two first names did not last long. When his father met Anagarika Dharmapala together with his son who was then only 7 years old, Anagarika was able to convince the father and the son to shed the English names and replace them with Sinhala first names – Gunapala Piyasena. This was the time when the Buddhist Revival in Sri Lanka and the rest of Buddhist Asia was in full swing.

Gunapala Malalasekera was an exceptionally outstanding student. He had his primary and secondary school education at St. John’s College, Panadura. He entered the Medical College in Colombo, but after two years, he had to abandon his studies due to the death of his father and lack of funds.
Nevertheless he was able to, with the support of his well – wishers, proceed to England and obtain his MA / Ph. D. simultaneously in 1925.

His achievements cover a wide range of fields:

It was his personal initiative that led to the All Ceylon Buddhist Congress (ACBC) presenting a Memorandum to the then Prime Minister Hon. D.S. Senanayake, in the early 1950s, calling for the establishment of a Public Commission of Inquiry, to inquire into the infringement of the rights of the Buddhist Sinhalese during 450 years of colonial rule and thereafter make recommendations to rectify the historical injustices meted out to the latter.

The failure of the then Government of Ceylon, to act accordingly and undo the wrongs done to the Buddhists during western colonial rule, led to the ACBC to appoint a Committee of Inquiry in 1954. The findings of this Committee (popularly known as the Buddhist Commission) were made public on February 4, 1956 at a public meeting held at Ananda College, Colombo.

Such was the impact of these findings that it led to the Buddhist monks coming on to the streets en masse and campaigning against the Government of Sir John Kotelawala who refused to implement these findings. His opponent S.W.R.D. Bandaranaike, leader of the Mahajana Eksath Peramuna (MEP) gave a public pledge undertaking to implement the findings of the Buddhist Commission Report. The outcome was a Buddhist Revolution in Ceylon in 1956 with the election of a new People’s Government under the leadership of S.W.R.D. Bandaranaike.

Professor Malalasekera contested for the post of the President of the UN General Assembly in 1962 and lost to Sir Muhammad Zafrulla Khan of Pakistan, who was elected President of the General Assembly in the 68th session, by obtaining the support of the entire Muslim block of countries, among others. The Buddhist block of countries was relatively weak at that time and it persists to this day in international fora and also at the UN.

In conclusion, it must be said that the likes of Dr. G.P. Malalasekera, come once in 100 years to shed light and illuminate the world and steer the global community and family of nations in a new direction and new path.

A word of thanks to the WFB. The World Fellowship of Buddhists is a body of world prestige enjoying the fullest confidence of the Government of Thailand to which we must be very grateful for its generosity and munificence. WFB is also backed by Buddhist communities all over the world.

It is most fitting therefore that we commemorate sincerely in a spirit of thankfulness the father of the WFB by recalling his noble services to the uplift of the Buddha Sasana at every General Conference of the WFB.