Interview with Bhante S. Dhammika on BudBlooms and the future of his works

Kuala Lumpur, Malaysia -- On 31 March 2020, the eBookstore Budblooms (in short of Buddhist Bloomings - http://budblooms.org) was launched. The portal contains the works of Bhante S. Dhammika, the Australian born monk who has dedicated his life to teaching and studying Buddhism for the past 43  years. The project was initiated by Bhante himself, although its final form as it is was the brain child of The Buddhist Channel (http://buddhistchannel.tv). Mr Lim Kooi Fong, founder and Managing Editor of the Buddhist Channel recently caught up with Bhante Dhammika via a whatsapp video chat and asked him a few questions on the  value and purpose of the project.

How did BudBlooms come about? 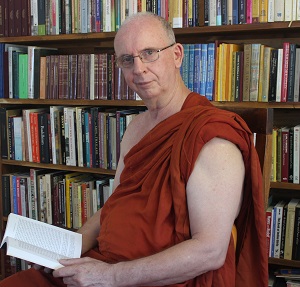 I was thinking about having my collection of writings digitized so that more people can have access to them. I have written over 25 books and scores of articles on Buddhism and related subjects over the last 40 years. Some of my most popular books such as "Middle Land, Middle Way"  and  "Good Questions, Good Answers" have been translated into many languages. Many people now have pervasive internet access, so it would be good if these materials are made accessible online. I am also approaching my 70th  birthday next year and I do not know how much longer I will be around. It is best to make my works available for future posterity now.

I approached someone I know in Australia about digitizing my works and he recommended me to contact  you because of your work on the Buddhist Channel. After an initial video chat you    suggested developing an eBookstore, an app and a Buddhism A to Z database. I had been thinking about something like this for a long time but only thinking about it, nothing more.

Having discussed it  and agreed what form it should take,  the Buddhist Channel took the initiative to raise funds for the project via a limited period crowd funding. That was in early January 2020. All went very well and by end of February 2020, we managed to raise more than the US$ 4500 required to develop the various products and the site BudBlooms.org was launched on 31 March 2020.

In what ways are your writings different from others?

Well, I do not consider myself to be a particularly good writer but I think I have two strengths.  I try to write on things that others  don’t, not just the same old stuff. Most Buddhists writers tend to stick to main stream views and to follow that paths made by many others.  I always have had a curious mind so I would think, What were the state of toilets like during Buddha's time? Did he have a tooth brush? What happened to Buddha's alms bowl? Things like that.

And because I know the suttas very well, I can find things that others overlook.  I am also an avid traveller and Buddhist places usually pique my interest.  Once again, I try to go beyond the well-known places associated with the Buddha  such as Sarnath, Savatthi, Bodhgaya etc, although I have documented them in detail in my book "Middle Land, Middle Way". Rather, I’m more interested in the obscure places and thus my articles on the secret caves of Elora, the lost cave  of the Pacceka Buddhas in the Himalayas, and locating places mentioned in the Jataka stories such as  the town of Sibi in Pakistan's Balochistan province where the Sibi Jataka is supposed to have taken place.

I think reading a lot is one of my strengths too and my interest in Buddhist history provides me with lots of information to write about.  My articles about the pioneering Tamil Buddhist Iyothee Tass, the first western Buddhists and the fascinating anti-colonial Irish monk Dhammaloka  are a result of such explorations in reading.

One thing that I often notice and which always makes me rather sad is how many things written about the Buddha or his teachings that are completely wrong. It’s amazing how few Buddhists actually read the Buddhist scriptures! So I  always make a point of giving references from the Tipitaka to anything I write about the Buddha and the Dhamma.  My aim to convey historical and factual accuracy on the materials that I produce, albeit while threading on a non-conventional subject.

How can Buddhism be best presented to the younger generation?

I think Buddhism has got a lot going for it.  It has a lot to offer but it needs to be presented in a way that is practical and applicable. Also, Buddhist ethical values, such as the First Precept – emphasizing kindness and compassion to animals, resonates with a lot of people and many find this attractive. As a joke but also to get my message across I put it in marketing terms like this – Buddhism has a great product but it has lousy salesmen, dour advertising and a haphazard distribution network.

Is it acceptable for teachers to propagate Buddhist teachings using technology and new methodologies?

It is perfectly legitimate as the present younger generation is profoundly different from the past, so we need different approaches, different terminologies and  personal as well. It is not about gadgets and tools, but knowledge and the source of information.

Today people generally uses technologies such as smart phones and the internet to get access to Dhamma, be it YouTube, websites, eBooks etc. So there is this "intermediary" and direct, personal transmission is no longer readily available. Also, there will always be a shortage of monks who are good communicators so we need other means to communicate with people.  With changing conditions and circumstances, I  believe we have to accept existing situations and  fully utilize what we have.

What are your plans in the coming years?

I am currently retired from public teaching and living alone in my modest abode in Australia. I manage to get by with a small   pension. I keep in touch with my centre in Singapore although I am no longer the resident monk there and I still communicate regularly with Buddhist friends. Not having to teach on a regular basis has afforded me much more time to meditate and write.

I am currently  working  on a biography of the Buddha. Many such books have been done but they almost always mix facts with legends that were developed in the centuries after the Buddha's parinibbana. Using only materials found in the Pali Tipitaka, my focus is not on the "birth to death narrative" biography of the Buddha.  My interest is to reveal a portrait of his habits, his style of teaching, how and where he travelled to, the debates he engaged in, his response to criticism, how others perceived him, etc.

As far as I know, there is no account of the Buddha like this and when it's finished I think people will find it extremely interesting. I hope so anyway. I am also looking forward to seeing through to the end the project  that the Buddhist Channel has embarked on and am very grateful that they have offered to do it and maintain BudBlooms for posterity, long after I am gone from this world. BC
If you wish to support Bhante's project....
There have been requests to keep the crowdfunding open and we have decided to do that to enable more people to share their merit to develop a new age Dhammaduta tool. All books developed here will be distributed FREE OF CHARGE. There will be continuous costs such as maintaining the server, producing new titles, engaging with other authors etc.

We are happy to accept any donated amount. All donors will have their names published inside the books/essays/apps for as long as the materials are hosted on the cloud. Donors may also make transference of merits to their departed ones which we will publish on the inside flap of the back cover.

Donation via Paypal (US$)

If you wish to contact us, please write to: editor@buddhistchannel.tv
TOP