After college, this child of Jim Crow went to Nepal, where she found the divine within and made peace with her past.

Alabama, USA -- Jan Willis never felt drawn to the Baptist church of her 1950s Alabama childhood—a place where the preacher hadn't done his job unless he whipped parishioners into a spiritual frenzy that left them fainting in the aisles. 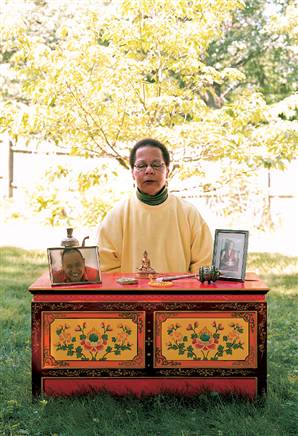 She avoided the revival tents until her mother forced her to go for the sake of her soul. And though she was eventually baptized at 14 - "a wondrous experience," she admits - she quickly fell back into her old suspicion of Christianity as the religion of white oppressors. Who could blame her? So-called Christians in her hometown periodically blinded black children by tossing acid or hot lye at them. The Ku Klux Klan even burned a cross outside Willis's house, as she crouched inside, expecting to die.

Willis had always cherished the ideal of peace and in 1963 marched in Birmingham with Martin Luther King Jr. In college, inspired by the images of monks in Vietnam setting themselves on fire to protest the war, she became interested in Buddhism. But by the time she graduated from Cornell in 1969, Willis was faced with a stark postcollege choice: go to Nepal and study Buddhism or join the Black Panthers and fight for black rights—"peace or a piece," as she puts it. She opted for peace. And everything in her life changed. Buddhism taught her compassion and self-acceptance. It led her to her current job, teaching Buddhism at Wesleyan University. And it even taught her how to make peace with the Baptist church.

Her journey wasn't easy. Arriving at a monastery outside Katmandu in 1969, she was the lone woman among 60 monks; everything around her was strange. She learned to adjust to the sounds of gongs and conch shells, of chanted prayers. She hiked miles up a mountainside to study with Lama Thubten Yeshe, who taught her that she already had the nature of the Buddha within, if only she could be still enough to find it. It was a powerful message. The bias she faced in childhood "had convinced me that I was unworthy," she says. "I felt humiliated and undeserving." But through Buddhism, she learned to empty her mind of negative thoughts and self-doubt. Whites in Alabama might reject her, but Lama Yeshe came to call her "daughter."

Decades later, the practices she learned in Nepal are still very much a part of her life. Every morning, Willis goes to the altar in her study, adorned with brass offering bowls, incense, statues of Buddhist deities and photos of Lama Yeshe and the Dalai Lama. Her prayers focus on the tasks of the day, so that her teachings may be pure and accessible and her work may help reduce suffering in the world. "In a time when everyone's faced with such fear and hopelessness, these practices help rekindle hope," she says.

They also help rekindle compassion, a Christian virtue as well as a Buddhist value. "The Bible says 'love your neighbor,' but it doesn't tell you how," Willis says. Buddhist meditation taught her how to endure a slight and let it go—and to pray deeply for the good of humankind, so that all may find inner peace. It's a subtle kind of love. "You're aware of your common humanity," she says. "You want them to avoid suffering." This realization enabled her, after more than 30 years away, to finally feel at home in her father's church. And it leads her to call herself today, at 57, by that rarest of  appellations—an African-American Baptist Buddhist.