Kirksville, Missouri (USA) -- Students often are stressed out about tests, papers and relationships, but it might not have to be this way. Marc Rice, associate professor of music, created a Buddhism interest, discussion and meditation group three years ago, called Kirksville Dharma, for this reason. 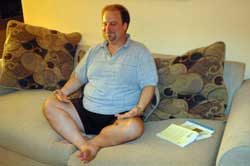 Raised Catholic, Rice said he realized at a young age that he did not agree with the stipulations of his religion, but it was not until six years ago that he realized what he truly believed.

"I was walking in the woods, and I started contemplating the nature of happiness," he said. "... I realized that the most profound moments are the ones we have with others."

Rice said he began reading different books and realized that all along he had been Buddhist, and when he converted, he noticed the benefits immediately. In Buddhism, unlike Christianity, the soul is seen as separate from the body and is called Buddha Nature, Rice said. There is one unified Buddha Nature that all beings share.

"We are always changing in body and mind, and Buddhism recognizes that," he said.

Similar to Christianity's Ten Commandments, Buddhists believe the Four Noble Truths: dissatisfaction because of self-centeredness, dissatisfaction from focusing too much on pain, to break free of dissatisfaction is to open up to all beings, and the final truth is to see everyone as worthy as you are, Rice said.

"Buddhism has the Four Noble Truths, but unlike Christianity, we don't have commandments, we have suggestions," he said. "You are able to accomplish these suggestions through mindfulness, being mindful of the way we speak, act, work and think."

The meetings, which convene at Rice's house at 8 p.m. on Sundays, usually last about an hour, Rice said. The first 20 minutes is spent discussing different issues, and the next 30 minutes is spent in meditation. During meditation there is a breathing exercise, and then the meditators take refuge in the Triple Jewel, which is the Buddha, Dharma, and Sangha, he said. Finally, they concentrate on something in particular, such as No-Self.

"No one can focus on the breath very long because ideas come into our heads," he said. "The idea is to watch them float by and understand that they are temporary and bring your mind back to your breathing."

Rice said it is important to realize that the Buddha is not a god Buddhists worship. He said Buddha was just a man who awoke after seven years of meditation and journey and provides people with suggestions for peaceful living.

"We don't worship him like a god because ... his ideas are not dogma," he said. "Buddhism is a self-journey, and each step of the way is testing out his ideas."

This is the third year the group has been meeting, and there are typically four to 10 people at the meetings, Rice said. There is no monetary cost. Rather, the attendants pay in what is called Dana.

"This is basically giving homage to the teacher," he said. "I charge one good deed for someone you normally wouldn't do something for, and I simply trust that they have done it."

Buddhism has become a popular choice of religion for those who are seeking answers other than the ones provided by Christianity. Ding-hwa Hsieh, associate professor of religion, said there is an overall factor about Buddhism that might seem appealing to people.

"One of the messages contained in the Buddhist view of 'anatman' [selflessness] is that if there is no 'I,' there will be no 'mine,' she said. "... One will not feel possessive of a certain thing or even a person and will not see things or people merely from one's own position."

Hsieh said that once individuals are able to let the ego go, they can overcome the feelings of greed, anger and ignorance and, at the same time, have the feelings of contentment, empathy and compassion.

Junior Dan Johnson has been an active member of Rice's group since he was a freshman.

"I had some ideas about what religion meant to me, and I realized that those ideas were very much in line with Buddhism," he said. "I understand that it is just a goal to live a stress-free life, not a reality, and I try to live at peace and not get caught up in everyday life."

Johnson said he began reading more intently when he realized he might be Buddhist, and Rice's meetings helped him to better understand the religion.

"Personal belief systems make no difference and will not be challenged at the meetings because what the Buddha taught can strengthen any type of belief system," he said.

For interested parties, Rice said he recommends "Awakening the Buddha Within" by Suyra Das.