Colombo, Sri Lanka -- Ven. Polgasduwe Gnanawimala Maha Thera, the last of the German monks ordained by Ven. Nyanatiloka Maha Thera at the Island Hermitage (Polgasduwe Tapasa–arama), Dodanduwa has passed away. His cremation took place at school grounds of Malalankara Kanishta Vidyalaya, Katudampe. He was in his mid -eighties at the time of his death. 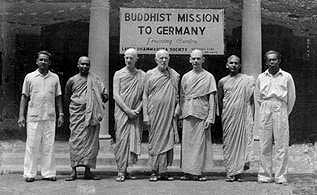 Ven. Gnanawimala was known as Friedrich Moller in his lay life. He met Asoka Weeraratna, Hony. Secretary of the German Dharmaduta Society during the latter's trip to Germany in early 1953 exploring the suitability of conditions in Germany for the dispatch of a Buddhist mission from Sri Lanka. One significant outcome of Asoka Weeraratna’s visit to Germany in 1953 was the recruitment of Friedrich Moller, a teacher of Rackow College, Hamburg to be trained in Dharmaduta work. Moller arrived in Sri Lanka on 5th June 1953.

The German Dharmaduta Society paid for the passage of Moller. He became an Upasaka and was placed at the Island Hermitage, Dodanduwa. Ven. Nyanatiloka Maha Thera instructed him. Moller was the first German trainee of the Society. It was intended to make Moller a member of the first Buddhist Mission to Germany that was planned to leave Sri Lanka in 1956 (the year of the Buddha Jayanti). However he preferred to remain in Sri Lanka upon completing his period of training and receiving ordination under the name of Bhikkhu Gnanawimala.

He spent much of his time at the Island Hermitage, Polgasduwa which was established by Ven. Nyanatiloka in the early part of the last century to provide the opportunity for those foreigners who either are already on the way to Buddhism, or who wish to live the religious life, and after accomplishing their training at Polgasduwa to return to their native countries in order to work for the Dhamma.

Ven. Gnanawimala was a close friend of Ven. Nanavira and Ven. Nanamoli, the two British monks who arrived in Sri Lanka in the early 1950's as earnest laymen seeking knowledge of the Dhamma.