The Dharma called on me at 7

San Francisco, USA -- In the Bay Area, diversity goes beyond race, sexuality and political philosophy. People of all spiritual and religious persuasions visit the region and call it home -- you never know what type of seeker you might meet on the street. 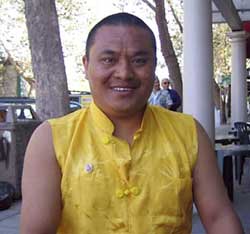 I was having coffee recently at a sidewalk cafe in Oakland with my friend Steve Georgiou when two Tibetan Buddhist monks walked up to speak with us. It turns out Georgiou, who teaches religious studies at San Francisco State University, had met them at a party the week before.

I decided to speak with Lama Dondhup Choesang, who is visiting the Bay Area with his teacher, Gyaldek Rinpoche, about his life as a Tibetan monk. The two men have been doing puja, or blessing ceremonies, to support themselves while they travel in the United States.

Choesang, 26, speaks English haltingly. He lives at the Sherb Ling monastery in Dharamsala, India, with 800 other monks of the Karma Kagyu lineage, one of the four main schools of Tibetan Buddhism.

So you live in India now, but you grew up in Tibet. How old were you when you joined a monastery there?

That's pretty young. Why did your parents put you in a monastery?

The conditions are very poor in Tibet. There is no decent way for people to support themselves or to get an education. So many parents send their children to monasteries.

Was it difficult to be apart from your family at that age?

Yes, it was very hard. One time I ran away, I missed my family so much.

How far did you get?

Maybe five miles. Then the monks came after me. They drove the car and picked me up. I was maybe 8 years old. I had just five rupees [50 cents] in my pocket, and it was very cold, winter time.

What did they do when they found you? Were you punished?

No punishment. They just gave me a warning. They said don't do it again. My own Rinpoche had compassion for me. He said I'm still a good person, a good human being even though I ran away. He said, "You have a really good heart. You can become a good monk." After that, I didn't run away again.

Tell me about life in the monastery where you live now. What's it like?

Our life is enjoyable. As monks we don't have to think about responsibilities like having a wife, children or family. So what we do is chant, read, write, meditate and debate Buddhist philosophy. And we do this to help all people and creatures.

What do you do for fun?

As young monks, we played a lot of sports, like football [soccer], cricket, badminton. We also enjoyed watching movies.

What is your favorite movie?

In Tibet there's a story about King Gesar, a mythical Tibetan king. He's like Arnold, with big muscles. He kills bad people, helps poor people. When I saw the movie, it reminded me of that.

That doesn't sound very Buddhist. I thought Buddhists were supposed to be nonviolent.

It's true that Buddhists aren't violent. This is just for fun. Everybody needs to enjoy themselves from time to time. It is exciting to see battles between good and evil.

What were your earliest feelings about spirituality, about God?

When I was 7, I didn't know anything about spirituality. I just played a lot. We chanted during the day. We didn't study the deep things of Buddhist philosophy until later.

When I was 15 or 16, I read books about Buddhism by Shantideva and others. There was one book by Shantideva I liked very much. In it I realized the importance of doing good things because of the law of karma.

Does that mean you were doing bad things before that?

Yeah [laughs]. When I was very young, I would throw stones at birds and animals with the other kids. I realized that was not a good thing to do. I also used bad words and had a lot of negative thoughts.

When did you meet Rinpoche, your teacher?

I met him in 1990 at Sherb Ling. The [head] lama invited numerous Rinpoches to the monastery, and he was one of them.

When we met, I felt that I knew him for many years before. I wanted to be with him and travel with him.

You mean, it was like you had known him in a previous life?

Yes. Also, one of his teachers told me that I should go with him and help him. He told me I was a previous incarnation of his assistant.

Many people in the West know that Tibetan Buddhists believe in reincarnation, but the concept remains a bit murky. How would you explain reincarnation?

It is based on karma. Our good actions and bad actions take us to where we are going. We continue our karmic journey from body to body, and in every incarnation we must strive to see our Buddha nature -- everyone has this purity within. The goal is to clean your mirror, to see your own perfect reflection. We are all like living Buddhas. We all can become like the Buddha. Anger, attachment and jealousy must be cleared away.

How often do you meditate?

I wake up at six and meditate for an hour. I go to bed at 10 o'clock and meditate for another hour. I also do walking meditation where I visualize the Buddha. Our true Buddha nature is like a light. If you meditate and be still you can see the light and the negative things go away.

When you meditate, do you think it helps the world or just you?

As I am meditating and visualizing good things, chanting, my "merit" increases. It's like filling up your car with gasoline. When you feel this fullness you project it out to all creatures. This helps out everybody. So I direct energy to the whole universe. You have to consciously do that. The phase that we use is "dedicate the merit."

As a monk you take a vow of poverty. How do you get by?

We don't have bank accounts or money. We live off donations.

America is full of beautiful things. Seeing what we have here, does it make you want to buy anything?

As soon as I get the desire for something, as soon as I get an attachment, I go back to saying my mantra and the need for wanting things goes away. I have temporary wants and desires because I'm a human being, but I realize that once I acquire these things I have attachments and that's not good. I believe that our soul is never going to have enough if we maintain attachments to things. If I have $1 million, I will still want more. It never ends. I know samsara. All of life is suffering.

If you live in Tibet, you understand that somebody's house might have been yours in a previous life. That's one reason why we have no sense of ownership like you have here.

I couldn't help but notice that you've got a very nice Macintosh laptop there. Where did you get that?

That was a donation from a sponsor.

And do you feel any sense of attachment to your computer?

Not in that sense. We use it for our work.

I understand you're going to meet with the Dalai Lama in November when he's in the Bay Area. What do you plan to talk about?

It's like a many-sided building. It contains relics corresponding to the five elements [earth, wood, fire, metal, water], like a microcosm of the Earth. Inside are holy things that help us to awaken our Buddha nature.

You've met the Dalai Lama a couple of times before, right? What's it like to meet him?

I met him twice in Dharamsala. He was teaching there. It's a powerful blessing to meet him. Tears came to my eyes. You can feel the negative energies leaving your body. I was so happy.

What are you impressions of life in the United States and the Bay Area?

I've been to many places in the United States, like Arizona and New York. I don't like cities that are too crowded. Berkeley is my favorite place. I like the open space here. People are friendly here.