Frisco, Texas (USA) -- When Ringu Tulku Rinpoche was a young child, the Buddhist Master was forced to flee the Chinese cultural revolution in Tibet. He and his family embarked on a perilous two-year journey, one that would lead the exiles away from the Himalayan high country toward safety in India. 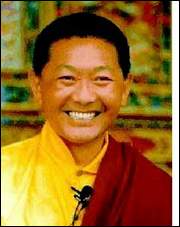 << Ringu Tulku Rinpoche, a Tibetan Buddhist Master, recently returned to his birthplace in Tibet after a 50-year exile. - Special to the Daily

Rinpoche was only three years old at the time.

This is hardly the type of traumatic adolescence that most people (including those in Summit) can reflect upon. But then again, nothing about Rinpoche's life has been ordinary, even the years before his exile in the 1950s.

As an infant, Rinpoche had been extremely sick, so much so that his uncle took him to see the local lama. When Rinpoche recovered to good health, the lama ordained that the child should become a monk. In the years that followed in India, Rinpoche studied with Buddhist teachers of the highest order. He received his formal education at Namgyal Institute of Tibetology and, upon graduation, began a 17-year tenure as professor of Tibetology in Sikkim.

More recently, the Buddhist Master has taught around the globe, offering advice at more than 50 universities in Europe, the U.S., Canada, Australia and Asia. In addition, he has published numerous books on Buddhism (both for children and adults) and has served as a teacher for many Western students, including Michael Gregory, founder of the Summit Dharma Center.

In June, after 50 years of exile, Rinpoche finally returned to his home of Rigul, Tibet.

I asked Rinpoche several questions in anticipation of his talk in Frisco tonight.

Q It seems that the search for a sense of home brings a lot of locals to Summit. How did returning to Tibet after so many years away change your perception of home?

A "My home is where my heart is and my heart is where there are people I love. So I feel at home in Tibet as well as in Summit County."

Q What is it about Buddhism that makes it resonate with people of the Western Culture?

A "Buddhism teaches you to be in touch with your inner most nature. I think therefore it resonates with people of East as well as West. The cultures and traditions are not a barrier to it."

Q How do you view our local activities, sports like skiing or snowboarding? What positive influence can they have in people's lives? Have they had any in yours?

A "I only did frozen yak dung snowboarding when I was a child in Tibet. I remember the joy and excitement. I think it keeps people fit and happy. Isn't that good enough?"