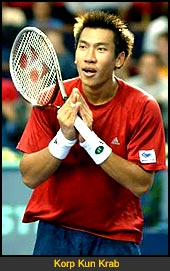 "I will spend the next seven days as a monk, especially meditating, which is something I can make use of when I return to tennis," Paradorn was quoted saying by The Nation newspaper.

Paradorn has adopted the Buddhist name "Mahaviro" which means "great and brave" for his stint as a monk. In a traditional preordination ceremony on Friday, Paradorn had his head shaved prior to donning the monk's saffron-colored robes. He will serve in a temple outside the Thai capital Bangkok.

It is customary for Thai men to serve in the monkhood for at least one period in their lives as a way of showing their religious devotion.

Paradorn, currently ranked No. 43 in the world, has been struggling on the court recently. He's been in two finals but still hasn't won a title this year.