London, UK -- Westlife singer Kian Egan and ex-Hollyoaks stunner Jodi Albert have turned to Buddhism, and have gone about paying tribute to Buddha in their West London home. 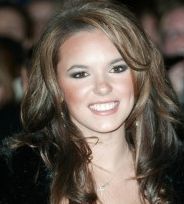 Kian and Jodi have spent thousands of pounds creating a Buddhist sanctuary in the spare room of their Chelsea pad, which they move into next week.

Amongst the eastern goodies bought especially for the room is a giant Buddha statue, and Jodi has been in her element purchasing furnishings.

Speaking to The Sun, Jodi explained how she became interested in the religion: "I wanted to do something to the flat and a friend introduced me to Buddhism.

"I got Kian to buy a Buddha statue and we've made our spare room look really mystical with it as the main piece."

Though it's perhaps a slightly odd way of finding a faith – through the desire to decorate one's home.

Buddhism was in the news over the weekend when more than 100,000 devotees travelled across India to a dense forest in Nepal, to see a meditating teenage boy they believe is an incarnation of Buddha.