London, UK -- Kate Moss has reportedly turned to Buddhism in the wake of her cocaine scandal. The supermodel feels drawn to the mystical religion, especially its principle of 'karma', and has been reading up on its teachings. 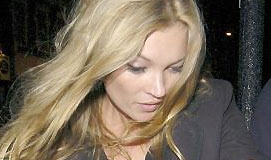 A source revealed: "Kate feels Buddhism will get her through the dark times.

"She's been reading up about karma and is fascinated by the idea that your behaviour comes back on you."

Kate - who lost several lucrative modelling contracts and checked into rehab after shocking images of her snorting cocaine were printed last year - is even thinking about volunteering to improve her karma.

The source told Britain's Grazia magazine: "She's thinking about doing charity work to get good karma in her life."