LEE TSE LING chats up Ngawang Gehlek Rimpoche and finds out what the globetrotting Tibetan lama brought with him to his adopted home in the United States.

Kuala Lumpur, Malaysia -- WHEN Ngawang Gehlek Rimpoche left Tibet for India, braving the snow-capped Himalayas on foot, he carried few physical possessions. In their place were rich spiritual and intellectual ones – the result of many years of schooling at Drepung Monastery, then Tibet’s largest learning institution. 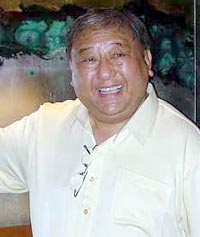 In exile like other Tibetans who left the region after the Chinese takeover in 1959, he began what would become a lifelong vocation: ensuring the continued existence of his culture.

It was this desire – and the encouragement of his teachers – that led him to the United States. When he first arrived, he worked with an anthropologist at the Case Western Reserve University who was researching the political history of modern Tibet (circa 1910s up to the 1950s).

The result was Rimpoche’s slice of old Tibet was recorded for posterity in the weighty tome The Demise of the Lamaist State.

“I personally don’t like the title,” he said with a conspiratorial air, having mulled over the word “demise” as if it had an unpleasant taste. “But,” he laughed, “it’s not my book,” evincing his philosophic approach to life.

Later, Rimpoche taught at the University of Michigan’s Department of South East Asian Studies, covering topics like the Tibetan language (modern and classical) and Buddhist studies.

“I went there for two purposes. The academic work is quite interesting to me, and it provides me with a regular way of living. Also, one of my jobs was to teach and find a ‘way’,” said Rimpoche.

His “way” was to set up Jewel Heart, a registered, not-for-profit organisation dedicated to the preservation of an endangered culture and teaching tradition based in Ann Arbor, Michigan. Though Jewel Heart has been going at it since the late1980s, the transition from private organisation to educational institution, which Rimpoche envisioned, has been gradual.

“We’re still struggling. Although we try to make it an institution, Americans still call it a mama-papa store (a family-run operation).

The organisation is staffed with qualified professionals.

“They feel that their occupation is more important to them than any other thing, so they put a lot of extra effort into it. Not only the paid employees, even the people who come to study. They bring their best ideas (forward) and then they push them.”

Evidently, it’s hard to run a centre that’s based on compassion and it takes all of Rimpoche’s wisdom to keep things running smoothly. After all, it’s not 1911 anymore. History records an incident when some irate monks slapped the Prime Minister of Tibet because they disapproved of his decisions.

Rimpoche loves to tell the tale from Tibet’s feudal era, when the Buddhist clergy was more powerful than the government.

The government always had to fear of the monks,’’ he laughed. “If they rebelled, there’s 10,000 here, 5,000 there (in the monasteries). The government, they had no standing army!”

The government wanted to overthrow a powerful family backed by the monks. This led to a dispute between the clergy and the politicians. “So the monks overran the summer palace, the headquarters of the government. They ran the officers down and started slapping the Prime Minister. The government officers apologised to the monks, saying, ‘we’re very sorry you are so upset, we will request for you to go back to your monastery and we will do exactly what you want us to do.’ And the monks thought well, we’ve done our job, so after they threw the people out they went back home!”

At Jewel Heart, Rimpoche uses yet another gem from his precious cache: knowing how to tread the middle path.