If anyone’s life has taken a complete 180-degree turn as a resultof a book, it is the Venerable Tenzin Palmo’s. From her first brush with Buddhism to her setting up of the Dongyu Gatsal Ling Nunnery in 2000, hers is a fascinating tale of self-discovery, compassion and joy. LOKE POH LIN has the story. 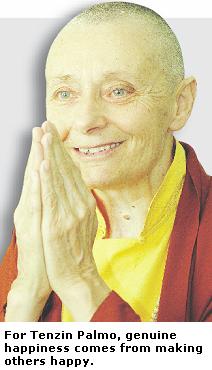 Kuala Lumpur, Malaysia -- Meeting the Venerable Tenzin Palmo is like breathing clean, fresh mountain air. It’s calming and exhilarating at the same time. Robed in saffron and red, she spoke with a gentle voice, a smile ever ready on her radiant face.

Tenzin Palmo was in Kuala Lumpur to speak at the upcoming International Conference on Buddhist Women from Saturday to June 21, and we took the opportunity to have a chat with her.

Amazingly, her spiritual journey started in London when she was 18, after reading a book.

“Up to that time I was searching for a spiritual path. Then I joined a Buddhist society in London. Mind you, that was in the early 60s, before the hippie movement and general interest in Eastern religions.

“I got involved in the Sri Lankan Society as I was interested in Theravada Buddhism. Then I read a book dealing with an overview of Buddhism and while reading about Tibetan Buddhism and its four traditions: Nyingma, Sakyapa, Kargyupa, Gelugpa, a voice said ’You’re a Gelugpa’.

“The last thing I wanted to be involved in was Tibetan Buddhism! But this voice inside said ‘You are a Gelugpa’. I went to see a woman about this and she advised me to read The Life of Milarepa, about a great yogi of the 11th century. It was one of the few translated books at that time. When I read that book, I realised that this is my path.

“I started to learn Tibetan. And when I was 20 I went to India to look for a teacher.”

In 1964, she met her Tibetan guru, His Eminence the 8th Khamtrul Rinpoche, and became one of the first Westerners to be ordained as a Tibetan Buddhist nun.

She studied under him for six years, after which she was sent to Lahaul for more intensive practice.

For a further six years, she practised in the monastery there and remained in isolation during the long winter months.

Eventually, Tenzin Palmo sought more seclusion and found a nearby cave where she stayed 12 years in solitary retreat. This became the subject of a book by Vicki Mackenzie, Cave in the Snow.

“The lamas of my monastery (Khampagar, at Tashi Jong) requested that since there was nothing at that time, we should start a nunnery. For the last 13 years we have been raising funds for the nunnery. We have 38 nuns now but we are building for 100. Every year, we take in 20 more. They study Buddhist philosophy, meditation, language.”

Teachers are senior lamas and nuns who have had the opportunity of an education.

A browse through Tenzin Palmo’s website (www.tenzinpalmo.com) shows that the nuns receive accounting and budgeting lessons too — so that they will be able to run the nunnery well in the future.

The DGL Nunnery offers young women from Tibet and the Himalayan border regions of India, Bhutan and Nepal an opportunity to develop their intellectual and spiritual potential.

Tenzin Palmo adds, “In the past, nuns were regarded as girls who couldn’t get married. In the last 10 years this has changed. They have met nuns from Korea and Taiwan and seen how confident they are, how respected and empowered. And it inspires them.

“Tibetans should introduce higher ordination for nuns. Nuns should have the opportunity to become more educated, same as the monks, but this has been denied women. The lamas themselves are most keen to help teach the nuns. Certainly the ones who have taught our nuns love teaching our girls. And have been apologetic that they have not thought about this in the past.

“Historically, the trend among women to not appreciate their own gender has not served aspiring nuns well. Their needs were not expressed. It is changing now, with a gentle, quiet revolution. Hopefully they will progress to advanced degrees. Now our concern is for higher ordination for nuns.

“We have discussed the introduction of higher ordination for nuns in the Tibetan tradition. Things are moving along. Now young scholars are also researching the bikkshunis (ordained nuns) and how ordination has come about.”

At present nuns in the Tibetan tradition can only receive the vows of a novice. The lamas were supportive while raising some points which would need to be addressed before the full ordination can be bestowed within their tradition.

When asked why there has been a lack of interest in training nuns and integrating them into the mainstream of Buddhist clergy, she answered: “It has been pointed out that if they had introduced ordination of nuns 20 years ago, it would not have been successful. The nuns were not educated. It would not have worked. Now it’s different. Nuns are more confident and have more self esteem.

“The nuns always had more difficulty in surviving. The nunneries rely on the generosity of lay patrons. When resources are scarce, the monks would get the vote. Women are not supportive of their own gender. Somehow the monks seem more meritorious. So generally there’s much less devotion towards nuns.

“Even now, with nuns coming into their own, their nunneries are rundown and struggling. Each monastery has a head, but the nuns have no one to represent them. It’s always a struggle to keep going. So through the ages, there has been fewer and fewer nuns.There weren’t enough good teachers to teach. Now, it’s different. Our professors really love our nuns and are proud of the fact that they teach them. The Dalai Lama is very supportive of the nuns also. He himself says that the future of the Dharma is in the hands of the women.”

The world lives in fear, intolerance and distrust. I asked Tenzin for advice on how to help us cope.

She said, “Buddhism is a path which leads to peace and lovingkindness and compassion. The world is full of violence and greed because it’s inhabited by minds which are working by themselves. Many disasters are brought about by the humans. We are unbelievably destructive. We have to change our minds, and purify our minds and cleanse ourselves.

“Greed, anger, arrogance, jealousy – all the negative energies would be gone if we can control our minds. Greed goes closely with anger and frustration. Materialism is nothing to do with levels of happiness. Buddha said greed is like salty water. You can swallow the whole ocean and never satisfy your thirst.

-------------------
Tenzin Palmo and a host of international speakers will be sharing their insights at the 9th Sakyadhita International Conference on Buddhist Women in Kuala Lumpur from Saturday to June 21, 2006. For more details, log on to www.sakyadhita.org.