Architecture is not just the index of civilisation, but also a celebration of life, says noted architect and planner Christopher Charles Benninger. Benninger's focus has been on "the Middle Path in Buddhism", the balance between humans and nature and between the built fabric and its natural terrain.

Timphu, Bhutan -- BHUTAN may seem like a printer's error on the world map. But the tiny Himalayan kingdom is a gargantuan feat of nature. For a geography ranging from challenging to hopeless and a culture shaped by steep ridges and narrow river valleys, modernity was once admissible only in measured dosages. However, the Land of the Thunder Dragon has long since shed its cloak of enigma and cast away its sequestered past. 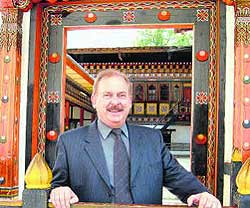 << INTELLIGENT URBANISM: Benninger tries to find a balance between humans and nature in his designs.

To witness how, travel to the verdant Wang Chhu valley lounging amid some of the most spectacular and stomach-lurching designs of nature. On the more hospitable western slopes of the valley, dotted with cloud-caressed monasteries and historic landmarks unruffled by time, a marvel of human vision is taking shape. But unlike most things human, this one does not intend to vie with Nature.

In 2001, the mountain kingdom woke up to democracy when the King of Bhutan announced the formation of a constitutional commission. Today, just three years shy of its first democratic elections, Bhutan is busy getting itself a new capital city and capitol complex. What is most striking about them is that their design is as potent an ode to people power as the country's departure from absolute monarchy. But with noted architect and planner Christopher Charles Benninger as the creative force behind them, anything else would have meant architecture for its own sake.

"Architecture," he firmly believes, "is the experiences of the people who live in milieus or enliven places, imbibe forms, perceive spaces and become lost in the in-between spaces, forgotten or intended, which impact on the emotions, sensitivities and memories of individuals."

For a nation that calibrates progress in terms of Gross National Happiness, Benninger's focus has been on "the Middle Path in Buddhism", the balance between humans and nature and between the built fabric and its natural terrain. "This search of conviviality within community, obligations and responsibilities, more than just freedom, is based in meditation, self-discovery and being."

Benninger's design is driven by the principles of `Intelligent Urbanism' based on balances between urban living and nature, tradition, technology, work, house holding, play, meditation, movement and governance. "These principles, rather a charter which the urban community agrees to put up to any new ideas or projects, have resulted in more than fifty percent of the urban land being reserved for greenery, water bodies and play-areas." 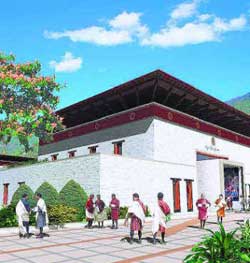 Benninger has planned the 30-square-kilometre capital as a set of "urban villages" situated in micro-watersheds between rivulets streaming to the main river. The outcome is an urban corridor connecting these villages through inexpensive, low-energy public transport, meant to deter the Frankenstein of personal automobile. The emphasis is on pedestrian movement replete with opportunities for people to interact unhindered by vehicles. For the inner parts, he has mooted participatory development by way of land pooling.

The site for the proposed National Capitol Complex is a 20-minute walk from Benninger's 10-member Thimphu office overlooking the city's sylvan bounty. In this complex slated for completion by 2008, Benninger has evoked vernacular systems of construction for contemporary demands of work and living.

In 1968, Benninger, an alumnus of the Harvard Graduate School of Design and Urban Planning at the Massachusetts Institute of Technology, first came to India on a Fulbright scholarship. Three years later, this disciple of Spain's Jose Luis Sert and a former member of the Delos think-tank on modern social and urban planning returned to India as a Ford Foundation consultant to set up the School of Urban Planning at Ahmedabad. But this time around, he was here for good.

For Benninger, moving to India has spelt liberation from various "forms of entrapment". Being in America and Europe, he notes, would only have dissolved him in a mob goaded in "one, pre-defined right direction" by media, money, fame and a smothering sense of self-importance. "America is great because you can pretend to be what you aren't, but India is great because you can find yourself and be what you are."

For well over 35 years since then, this American has lived and worked in a "self-imposed exile" in India, conceiving award-winning designs for institutions, residential schools, hotels, corporate offices and large-scale housing projects, preparing plans for the governments of Bhutan, Nepal, Malaysia, Indonesia, Sri Lanka and India, and advising the World Bank, UNO and Asian Development Bank on development projects in Asia and Africa.

As an architect, much like a cinematographer, Benninger programmes human experiences of moving through the spaces he designs. Informing this preconceived "kinetic architecture" are real people who transform these spaces into "places", imbuing them with life and meaning.

What fascinates Benninger about Indian architecture is its vacillating context defined by the happenings within, a far cry from "the dull, fixed images of packaged consumer items" that pass off as architecture in the West. He makes no secret of his dismay, and surprise, at the Indian awe of Western "stunts parading as architecture" that he equates with children screaming for attention. To qualify as true architecture, a structure, he believes, must span the continuum of time. "What are more interesting are the precursors to the events that give shape to the form, and the impact of the forms on future events."

To Benninger, the very chaos, uncertainties and contradictions that fetch Indian cities generous disparagement are indeed the "raw material of creativity and free thought". "While everyone has heard of Newark or New Jersey where there is no soul, no life and just empty shells and lost memories, Indian cities represent the dynamism and energy that thrive out on the periphery of the global system." This is perhaps why he is pained to see India redefine itself based on "consumption and the false sense of personal power it engenders".

Up next for Benninger is the prestigious commission to redesign the campus of the Indian Institute of Management, Kolkatta, for which 15 of the most celebrated architectural firms in India had been short-listed. "It's an honour and a challenge to work with such erudite clients for a value-based, intellectual centre." In envisioning "a new milieu for learning, discovery and creativity," Benninger's accent is on an ambience that will at once facilitate interaction, reflection, contemplation, self-discovery and the development of personal discipline.

And in working within an existing beautiful campus teeming with water ponds and trees and in integrating several old, uninspired buildings into a new whole, Benninger seeks to amplify a world-class centre of learning into a new business and cultural environment. "A campus, whether for a capitol complex or an institute, must have its iconic qualities articulating its values, importance and the triumph of human soul!" Indeed, for architecture is not just the index of civilisation, but also a celebration of life itself.