New Delhi, India -- These are the words of the Buddha that guided Dr. B.R. Ambedkar all his life. And he proclaimed to the world, "Tell a slave he is a slave and he shall revolt." And he ordered the untouchable brethren, "Emancipate yourselves or (you will) perish." 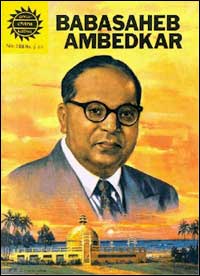 Ambedkar was first introduced to the Buddha by The Life of Gauthama Buddha in 1907, a book given him by its author and his teacher, K. A. Keluskar.

But Ambedkar was not introduced to the Buddha with an empty mind. Earlier, his father had daily made him read the Hindu traditional stories, the Ramayana and Mahabharatha. He began to make a comparative study of the Buddha's life and of Hindu mythological characters. This led his mind to a state in which he wanted to form the ultimate aim of knowing "truth as truth and untruth as untruth."

Ambedkar loved and revered the Buddha so much that he considered the Buddha as the first of his three gurus (teachers). Prince Gauthama renounced riches and the worldly life and, as a hermit, wandered from place to place in search of the best education and the best teachers in order to banish his ignorance. With great effort he attained Buddhahood, only to use it to deliver the laity from ignorance to knowledge, from suffering to happiness, and from craving to the blessed state of peace. All this impressed Ambedkar very much. He followed the Buddha's original path and loved him for his untiring efforts to eradicate ignorance.

In his love for the Buddha, Ambedkar pleaded for liberty, equality, and fraternity. Buddha did not make anything a taboo. But he called on people to exercise their good conscience or judgment in doing anything and asked them to follow the middle path, avoiding the extremes. He asked them to trust their own mind and thinking abilities. He did not recognize any social system of inequality like class, caste, or race. All are one in Dharma (the path of enlightenment) after joining it, as a river loses its identity after it joins the ocean.

Fraternity is the cause of morality. One who is not moral cannot practice brotherhood. Morality may not be necessary when we are alone, but the moment we enter society we have to observe moral principles to live and let live. Hence, the Buddha made morality an essential feature of his Dharma, which begins with Sila (behavioral discipline/morality/ethics-ed.). Ambedkar says that, although the three concepts of liberty, equality, and fraternity were proclaimed in Europe in the 18th century A.D., the Buddha preached them in the 6th century B.C.

Ambedkar also made a thorough study of Marx. Both Buddhism and Marxism have the same aim of social justice, but, as regards the means to achieve that aim, Buddhism differs from Marxism. Many Marxists advocate violent revolution to gain social justice, but the Buddha suggested a democratic and peaceful path. Ambedkar's painstaking study of these two philosophies is truly marvelous.

In his book The Buddha and the Future of his Religion, Ambedkar said that Buddhist literature is vast, and he felt that ordinary people should be able to find all the essentials of Buddhism in one volume, like the Bible or the Koran. His admirers from all over the world urged him to write one himself. He dived deeply into the vast ocean of Buddhist literature and prepared a volume for Buddhists called The Gospel of Buddhism, which he modified later as The Buddha and his Dharma. This has become the bible of Indian Buddhists.

He also said that a central Buddhist organization would be necessary to spearhead the spreading of Buddhism worldwide. After his death in 1956, the two organizations started by Sangharakshita in London, namely, "Friends of Western Buddhist Order" and "Trilokya Bouddha Mahasabha Sahayakagana," are working for this, but what is further needed is a unified effort on the part of all Buddhists to making a vigorous effort in spreading the Dharma all over the world.

On Oct. 14, 1956, Ambedkar converted to Buddhism, along with his 300,000 followers. For the conversion ceremony, he prepared a list of 24 oaths in addition to trisaranas (the three refuges).

He felt this necessary because, during the time of the Buddha and after, there was a conversion ceremony for the Bhikkus, but there was no conversion ceremony for the laity. They could practice the Dharma voluntarily or abandon it whenever they feel inclined. Ambedkar considers this a deficiency and a cause of the decline of Dharma in India. It enabled the laity to abandon Dharma and enter Hinduism as freely as they entered Dharma.

He wanted to plug that gap. In the words of Dr. Eleanor Zelliot, an American Ambedkarite scholar, "The difference between upasakas and bhikkus as to initiation of diksha turned out to be a grievous one, in Ambedkar's view. It was this 'grave omission' that Ambedkar amended, when he devised the Dharma Diksha ceremony."