ROSEMEAD, CA (USA) -- Being a Buddhist nun is a far cry from what the Venerable Yifa had set out to do in her younger life. She wanted to be a politician. "I was very ambitious," Yifa remembered. "I wanted to shake up the system." 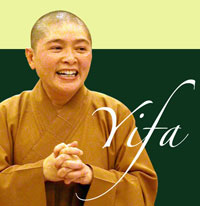 But her priorities changed dramatically during a summer retreat she took at the age of 20. There, Yifa learned to meditate, discovered the lessons of Buddhism and found a new path.

In 1979, Yifa started a career as a nun at Fo Guang Shan Monastery in Taiwan. She was one of the monastics the Venerable Master Hsing Yun recruited in the late 1970s to bring a much-needed infusion of young people into the Buddhist faith.

Before that time, many monks and nuns were elderly, having waited to commit their lives to Buddhism after their children had grown, she explained.

"At that time, I recognized that to help Buddhism, you need people who are well-educated and from a younger generation," Yifa said. "I think that well-educated and young \ could really attract people to look at Buddhism differently."

Yifa, who has a law degree from the National Taiwan University, a master's degree in philosophy from the University of Hawaii, and a doctorate in religious studies from Yale University, is set to be honored Oct. 18 for her work over the years as a Buddhist nun and a leader in the interfaith movement.

The award, which will be given at the United Nations headquarters in New York, recognizes secular and religious leaders who have promoted interfaith alliances.

She is being honored specifically for her work with the Humanistic Buddhist Monastic Life Programs, which gives youth first-hand spiritual practice; her interfaith dialogues, including working with Catholic nuns, and her book, "Safeguarding the Heart: A Buddhist Response to Suffering and September 11."

Yifa said the terrorist attacks of Sept. 11, 2001, were not just a Christian or Muslim issue, but an event that affected all.

"My first response to this incident was that America would need healing," Yifa wrote. "And when I saw the towers collapse, I felt my heart collapsing with them."

Yifa, who in 1991 became the first president of University of the West, will receive the honor alongside other noted peace advocates, including slain journalist Daniel Pearl. His award will be accepted by his father.