San Francisco, USA -- Jet Li is famous for his fists and kicks but he'd like his compassion to be a hit, too. 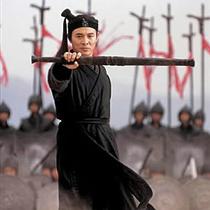 Li, who noted that a quarter of a million people committed suicide in China in 2003, hopes that he and his latest film, Jet Li's Fearless, can help make a difference.

"I would like to spend more of my energy practising Buddhism and helping younger Chinese people to understand life," he told the San Francisco Chronicle.

Jet Li's Fearless is an epic Chinese martial arts movie about spiritual growth and national pride. It's his first Chinese-language film since Hero in 2002.

The 43-year-old star recently moved his family - his second wife, former actress Nina Li, and their two young children - from Hong Kong to Beijing, where he was born.

"The Buddhism idea is to look back, to look into yourself. It's a feeling," he said, "the feeling is different from the material. You need to make yourself happy from inside your heart."