San Francisco, USA -- It's Thanksgiving, time for another nationwide gratitude wake-up call. On this one day each year, Americans feel free -- or some might say compelled -- to openly express thanks for life's blessings. On the other 364 days, we are left in peace to mumble and grumble about the minor annoyances of life, interspersed with occasional quick thanks to the powers-that-be when something truly spectacular happens. 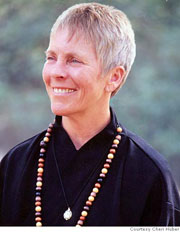 <<  Cheri Huber is a Buddhist teacher in the Soto Zen tradition. She founded the Palo Alto Zen Center and the Zen Monastery Peace Center in Murphys, Calif., and is the author of 17 books. Photo courtesy Cheri Huber

But gratitude is something we can and should feel year round, says Cheri Huber, a Buddhist teacher in the Soto Zen tradition. Huber says every day should be filled with focused appreciation, both for what we have and for what we don't have. Doing so, she believes, is the best way to both grow spiritually and achieve more of what we want in the mundane world.

Huber, who founded the Palo Alto Zen Center and the Zen Monastery Peace Center in Murphys, Calif., is the author of 17 books, including "Suffering Is Optional: Three Keys to Freedom and Joy" (2002, Keep it Simple) and "Unconditional Self-Acceptance" (2005, Keep It Simple). I spoke to her last week by phone about the importance of gratitude, the nasty little voices in our heads that ruin a perfectly fine day and the Buddhist precept of non-attachment ("way overrated," according to Huber).
What is the most important thing that you've learned about gratitude?

Why is that? You would think we would want to dwell on what's going right in our lives.

If we take a look at how our mind works, most of us will tune in pretty quickly to the fact that there is a conversation going on inside our heads. Sometimes we think of it as thought, but when we really start listening, folks are talking in there [laughs]. And that conversation is often about what we didn't do, what we should be doing and so forth. That's because so much of our childhood conditioning causes us to be focused on what's wrong -- so that we can be the right person, have the right thoughts, have the right feelings, do the right thing.

How do you remain focused on the things that you are grateful for?

One of my great spiritual heroes is St. Teresa of Ávila. Apparently, her whole religious life consisted of saying "thank you." That was the content of her prayers. So I spend a good deal of my day just reminding myself of that, noticing what's beautiful, what's kind, what's polite and what's caring.

That said, most of us want things that we don't have, and that longing can become pretty desperate and scary, like not having enough food to put on the table. How do we balance those unmet desires with a sense of gratitude?

Not having enough food to put on the table has never been an issue for me. And yet if I listen to that conditioning, my needs could have the same desperate quality. Depending on who I am and what I'm doing, that voice that tells me there's not enough and that there's something wrong could get pretty desperate because, let's say, everybody else is driving a BMW and I'm not. So it's really pretty important to sort out what's a legitimate need and what's not.

And what about people who really are hungry or homeless?

I spend a great deal of my time with people who don't have food to put on the table, who starve every day. And yet in my experience -- and I think that they would say the same thing -- that fact doesn't have anything to do with the amount of gratitude that they feel. They are grateful for all of the things that life is, for the sunshine, for the trees, for the people in their lives and for the hope of a better life for their children.

I think it's a mistake to say that focusing on what we don't have is a way to get what we want. In fact, the opposite is true. Focusing on not having is the fastest way to not have it.

What do you mean?

Can you tell me about a time when gratitude made a big difference in your life? Maybe it turned a situation around or changed your way of thinking?

One example is the birth of my daughter. That taught me about loving a human being unconditionally. Through that unconditional love for that one child I came to see all children the same way. To me every child is as worthy, as desirable, as important as the one that I gave birth to.

Another place that happened for me was with religion. Through seeing the [spiritual] transformation that's possible in my life I grew to love all spiritual practices and religions.

Yes, because at their heart, at their core is the same desire to be one with that which animates us, that which gives us life.

Have you always been a Buddhist?

No. Actually I grew up without any religion. But I feel very fortunate that when I got to be about 13 or 14 and started kind of questioning life and how all this works, my parents gave me absolute encouragement to go find out.

And so I would beg all of my friends to take me to church with them and that sort of thing, and it was a process from about the age of 13 to 28, before I came upon Zen and realized that it was the path for me.

How did you discover Zen?

Well, it's a funny thing. When I was a kid, I can remember thinking: "What I'm being told is that I need to get good grades, so that I can get into a good school and get a good education, so that I can get a good job. And then I need to meet the right person, get married, have children and prepare for retirement." And I thought: "That's crazy! Here we're rocketing around on this clod of dirt, in space, and we don't know where we came from or where we are going, and my whole life should be focused on retirement? That's insane! I need a lot of other questions answered before I'm going to buy into this program."

So I continued studying in earnest, and when I picked up a little book by a fellow named D.T. Suzuki -- it was called "What Is Zen?" -- I had really found something interesting. I didn't know exactly what he was talking about, but I knew he did. He wasn't theorizing. He wasn't speculating. He was talking from an experience of clarity. And I really wanted to know what the heck he knew and how he knew it. So I just -- I fell in love with Zen. And many, many, many years later, I'm as in love as I was then.

Buddhism teaches people to detach from the illusions of the world. But it seems like practicing gratitude might strengthen those attachments. I mean, if I'm giddy about my family and friends, my work and the world around me, I'm less likely to want to be detached. So how does that work?

Well, I think that detachment thing is way overrated. I really do. I don't actually even believe that that's what the Buddha was teaching. I think that what's happened with the idea of attachment is that people are completely attached to non-attachment, and they spend their lives trying to be detached.

For me, rather than saying, "I must have a new car," or trying to learn to be happy with the old car or with being a pedestrian -- what I need to do if I want to be free of all of that is to figure out what I believe having a new car is going to do for me. And as I begin to work through it, I will find that my ego believes that if I have that new car, I will feel a certain way that is going to make a difference in my life.

And in that process, if I'm really paying attention, I will realize that I can then just have that feeling and it's not dependent upon a new car. This frees me up to have a new car or not have a new car and be fine either way.

So you could still have that car, and not be attached to it?

Wherever you are, be there and be present about it.

This Thanksgiving, is there anything in particular that you're particularly grateful for?

Yes, our work in Africa. I live in a little town called Murphys, up in Calaveras County, and for some time I have hoped and dreamed that our town would support a cultural exchange with Kantolomba, a small town in Zambia where we are helping feed and care for children who are living in deep poverty.

This year, two local merchants in Murphys approached me and said, "We would like to focus on your project in Africa for the holiday season." They are putting pictures of the kids up in their store windows, they have created T-shirts that say "Gratitude Wants to Give" and they are doing this whole campaign to let the people in the community know about the project. It's growing into this really beautiful expression of generosity, and I am deeply grateful for that.