An equal chance at enlightenment

Since she was ordained as a bhikkhuni over 20 years ago, Jampa Tsedroen has been campaigning to give other Buddhist women the opportunity to pursue their faith

Bangkok, Thailand -- Humility is her most distinctive trait. Despite the significance of the work she's undertaken over the past two decades, the Venerable Jampa Tsedroen has retained her down-to-earth and friendly manner. 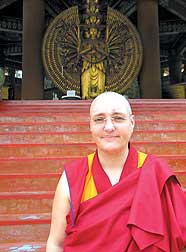 << Tranquillity in activity: For more than two decades, bhikkhuni Jampa Tsedroen has dedicated her life to seeking equality on behalf of female Buddhist practitioners.

Yet her innate warmth is intertwined with a steely determination. In fact it is probably the balancing of these two qualities that enables her to do what she does so well, namely campaigning for women around the world to be able to pursue enlightenment as bhikkhuni - female Buddhist monks.

Her self-imposed mission has been far from easy; the German-born monk noted with a laugh that she often has little time for sleep. Also, the controversial nature of the issue she raises - that the majority of monks continue to resist the calls to admit women, while certain women's groups concerned either dismiss the topic or side with their male counterparts - means the Venerable Jampa Tsedroen must regularly tread with the utmost caution.

Unlike in politics or the pursuit of other social causes, the use of terms like "rights" or "fight" could trigger fear or even distrust of the movement Jampa Tsedroen is advancing and render it liable to being dismissed by its opponents as another gung-ho feminist battle.

"Everybody who enters the Buddhist order would very much like to live a peaceful life in harmony with everybody. We want to pacify our own minds. So the word 'fighting' [being used] in connection with Buddhist teachings does not sound very nice," explained the bhikkhuni.

"I come from a tradition that trains us to be critical and fight for our rights. But I notice that if I have to translate the word 'right' into Tibetan as tobtang, it would sound very unpleasant. My teacher used to tell me I'd do better saying gokab, which means 'chance' or 'opportunity'. But I'm also politically active, I've been working on the issue of human rights violations in Tibet. So I have become used to the word 'fight' and I don't mind fighting if necessary.

"At the inaugural Sakyadhita international conference [for Buddhist women] in Bodhgaya in 1987, I remember His Holiness the Dalai Lama himself saying: 'You women have to fight for it [bhikkhuni ordination]. You cannot expect the monks to serve it to you."'

Semantic sensitivity is but a small part of the challenge of helping Buddhist women. The bigger, looming obstacle is the thousands of years of patriarchy that the spiritual realm has not been excluded from. Ironically, Lord Buddha's decision to allow the first group of women, led by his stepmother Mahapajapati, to be ordained as bhikkhunis over 2,500 years ago has often been used to justify why they should not be ordained now.

Opponents of female ordination point to Buddha's initial refusal of Mahapajapati's request and his issuing - upon consenting after his assistant monk Ananda's appeal that women are as capable as men at attaining enlightenment - of eight rules called Gurudharma that strictly curtailed women's monastic roles. They also cite Buddha's dire prediction that allowing women into Phra Sasana, that is, Buddhism, would halve its lifespan, and refer repeatedly to the "broken bhikkhuni lineage" alongside the decline of the ecclesiastical institutions in India and Sri Lanka a few centuries after women were admitted to explain why it should never be revived today. 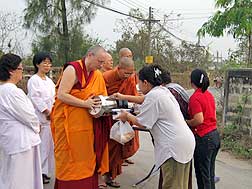 The Venerable Jampa Tsedroen's approach to such opposition has been a clever, gentle plea to return to the original "spirit" of Lord Buddha's teachings.

Rather than an emotional plea, the bhikkhuni and her fellow advocates have undertaken a thorough study of the Vinaya scriptures to show the teacher's courage, far-sightedness and compassion in giving space to "the other sex". One of the texts Jampa Tsedroen often quotes from is the Cullavaga X, wherein Lord Buddha answered Ananda's question on whether or not women who decide to "go forth from home into homelessness in the dharma" can liberate themselves from the cycle of samsara (the endless cycle of birth, suffering, death and rebirth). He replied: "Women, Ananda, having gone forth are able to realise the fruit of stream-attainment or the fruit of once-returning or the fruit of non-returning or arahantship."

The awakened one's words were recited again during Jampa Tsedroen's recent keynote speech at the UN's Bangkok office, where the female monk was one of 20 recipients of the UN's Outstanding Buddhist Women Awards for 2007.

"What would the Buddha say today? Can one follow Buddhism on the one hand and keep human rights on the other hand?" Jampa Tsedroen asked those attending the awards. "It cannot be that 2,500 years ago, during Buddha's lifetime, bhikkhuni ordination was possible, and nowadays, when everybody speaks about the equal rights of men and women - rights that are guaranteed by the [Universal Declaration of] Human Rights and the Charter of the United Nations ... it is no longer possible to become a bhikkhuni.

In retrospect, despite the Venerable bhikkhuni's refusal to take credit for her work, her campaigns as part of the Committee of Western Buddhist Nuns herald a refreshing chapter in the history of globalised Buddhism.

Due to historical reasons, the Mahayana (also called Dharmagupta) Buddhist tradition, as practised in South Korea, Hong Kong, Taiwan and Vietnam, has been the most open to the ordination of women. Several Western women, including Jampa Tsedroen, have sought full ordination as bhikkhunis there. (The Tibetan tradition only allows women to be ordained as novices, or samaneris, while the Theravada tradition does not recognise either samaneris or bhikkhunis). It is these women, together with other Buddhist women from the West, who have been relentlessly pushing the issue forward. Jampa Tsedroen said His Holiness the Dalai Lama, as the head of Tibetan Buddhism, has given his full support to the movement to revive the bhikkhuni's order, including donating 50,000 swiss francs (1.36 million baht) from his book royalties to finance the activities of the Committee of Western Buddhist Nuns.

However, the exiled Tibetan leader conceded he could not act alone on this pivotal matter. Monastic leaders, male and female, from other Buddhist traditions and countries need to participate in the debate and make a joint decision. Hence the ongoing preparations for an historic "International Congress on Buddhist Women's Role in the Sangha - Bhikkhuni Vinaya and Ordination Lineages", to be held this July in Hamburg, Germany.

As key organiser, Jampa Tsedroen has been busy liaising with the head monks and nuns from different traditions as well as with lay Buddhist and non-Buddhist scholars on the Vinaya and the history of Buddhism.

"His Holiness the Dalai Lama is very interested in the opinions of Theravada monks because they are considered to know the Vinaya very well. He would like [them] to show the most proper way of how to do it [revive the bhikkhuni's order in accordance with the Vinaya]. So we are trying to invite Vinaya scholars as well as leading monks from Theravada countries to Hamburg to discuss the matter for Tibetan Buddhism.

"His Holiness also said he would like to seek full support to raise the social status of women in all the countries where Buddhism is practiced. So we thought it would be very good to have some kind of common, international, non-binding resolution so that we get the moral support from all Buddhist leaders to revive the bhikkhuni precepts."

The restoration, if and when it takes place, will not only benefit those in the ecclesiastical domain. In the same speech she delivered at the UN in Bangkok, Jampa Tsedroen argued that as women's low social position leads to their exclusion from religious orders, this in turn helps perpetuate their oppression.

"Many advocates of bhikkhuni ordination consider that there is a direct relationship between the low status of women in Thai Buddhism and the inferior status of women in [Thai] society, which places them at risk of abuse such as domestic violence and sexual trafficking, as well as increased vulnerability to HIV."

In contrast, monastic women in countries like Taiwan and South Korea, Jampa Tsedroen pointed out, have taken a leading role in social progress. Having access to a good education through the orders they belong to, they become valuable public assets, serving their communities in various capacities and in institutions ranging from hospitals to Buddhist TV stations, kindergartens and universities.

Now in her late forties, Jampa Tsedroen continues to juggle her time between work helping refugees at the Tibetan Centre Hamburg, campaigning on women's issues, teaching, and finishing her doctoral thesis at the University of Hamburg. She also works with a training programme for young Tibetan nuns in southern India that she started in 1988. A trace of pride was audible in her voice as she described how the student nuns there have excelled in their religious pursuits, with two of them recently invited to teach the advanced subject of Abhidharma at a monastery in Taiwan.

But when it comes to talk about her own practice, the venerable Bhikkhuni is as self-effacing as ever. True to her bodhisattva vow, Jampa Tsedroen said serving the community is more important than one's personal development. As a result, she thinks her meditating ability "is still not the best".

"I feel I haven't practiced enough. I've accumulated merits and increased a little bit of wisdom, but still my time for meditation and retreat is not enough.

"Now I'm getting old, my hair is getting grey, my eyes are getting bad, I have problems with my back and my memory is also getting weak. I'm a little bit afraid," she paused for a laugh, "that I will pass away before I start a proper meditation.

"We have to take it as it comes, making the most of each situation. So I'm putting a lot of hope in the young Tibetan nuns."

-----------------------
The International Congress on Buddhist Women's Role in the Sangha - Bhikkhuni Vinaya and Ordination Lineages will be held from July 18 to 20 in Hamburg, Germany. For details, see http://www.congress-on-buddhist-women.org/