Colombo, Sri Lanka -- Many are confused of what Buddhism aspires on war and peace and the Vesak season could be seen ideal for the people to dwell upon the Buddhist precepts on war and peace. 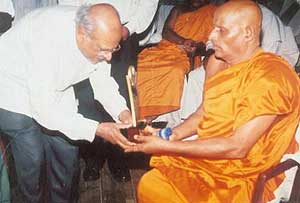 Dwelling upon the war, peace and how they could be viewed through Buddhist philosophy and its significance on Vesak, Ven Mahagalkadawala Punnyasara Nayake Thero said that in Buddhism the highest perception is the principles and precepts involving Amisa pooja and Prathipaththi pooja.

Things like alms giving, attaining Sil, and Bhavana are the triple religious observances (Punya kriya). Things like pandols, dancing, singing and musical shows on Vesak could be categorized as Amisa pooja, which are not important or essential in the observance of Vesak.

But when a religion goes to the people, they sometimes go beyond the strict principles of that religion and introduce traditions according to the social and secular needs, which has to be tolerated to some extent. In Buddhism these worldly things are called “Visuka Dharshana”.

When Prince Sidhartha was born in the 6th Century BC, he was born to a world that was full of inequality, injustice. But at the time with the birth of the Thathagatha wonders have occurred. With His birth there was peace, there was tranquility and there was harmony in the world. In the animal world arch enemies like cobra and mongoos, crow and the owl became friends, providing harmony in the animal world too.

Ven Punnyasara Thero said that these examples portray a clear message of peace from the day Gowthama Buddha was born. When Prince Sidhartha attained Buddhahood He went to the battlefield with the message of peace. There was the conflict of Saakkya and Koliya to the point of war each other sharpening their weapons to attack on a dispute to share the water of the River Rohini.

Lord Buddha came to Sri Lanka from India to settle a dispute and averted bloody war when there was a dispute between Choolodara and Mahodara for a jeweled chair. Lord Buddha was able to convince the two parties of the waste of human life in war and averted it. The convinced parties ultimately offered the valuable chair to Lord Buddha.

Ven Punnyasara Nayake Thero insisted that if there is any Buddhist who glorifies and perpetrates war in whatever way that person is clearly against Lord Buddha’s teachings and stressed that if anybody is willing to promote peace not only in Sri Lanka, but anywhere in the world, there would not be any ideal time than during Vesak, where the entire Buddhist world commemorate the three great events in the Buddha’s life, Birth, attaining Buddhahood and His attaining Nibbana.

He pointed out that peace is the most important message the total life of Lord Buddha inherited to the followers of his philosophy, but it is really unfortunate that some of his so-called disciples while forgetting his message of peace, goes against his doctrine perpetrating war and calling for death violence, destruction and bloodshed.

It is most appropriate to call for world peace, especially peace in our country at a time the United Nations has recognized the Vesak.

The best example Lord Buddha has given in this sphere is that when mating human beings do not have differences between any ethnic groups, religious or caste divisions. It is the male and the female among human beings and not of any kind of other differences.

But in the case of animals it is quite different. Cats and bulls do not mate, cobras and pigs do not mate, but in the human world, there is the sex appeal between man and woman and this appeal would not be confined to within the communities of Sinhalese, Tamil, or any other nationality. Therefore Ven Punnyasara Thero insisted that Lord Buddha’s message is crystal clear.

Ven Punyasara Nayake Thero is a hard-core Human Rights activist and and is a great peace mover, he used to move to North, East and boarder villages with a large number of other Monks in peace activities and he even has won various awards for working for peace.