A closer look at Gary Snyder

The legendary bard on Buddhism, ecology and Kerouac

Ventura County, CA (USA) -- A friend of Allen Ginsberg and Jack Kerouac, poet Gary Snyder was immortalized as Japhy Ryder in Kerouac’s Dharma Bums, a story about a group of friends interested in backpacking, women, carousing and Buddhist philosophy. But if you see Snyder at the Ojai Poetry Festival, do not call him “Japhy.” 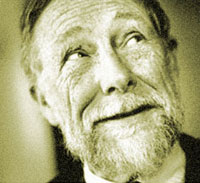 For the record, Snyder says the character is a fictional creation. He was “modeled on who I was then,” Snyder says, but the stories of Japhy Ryder are not really based in truth. Snyder, who lived with Kerouac, also claims the book is not his friend’s best work. “It was written too hastily,” he says.

The real Gary Snyder, though perhaps less well-known by mainstream America than his fictional counterpart, is a poetic force of nature. According to his Web site at UC Davis, where he taught until recently, Snyder has published 18 books and had his work translated into more than 20 languages. Born in San Francisco and raised in the Pacific Northwest, Snyder’s work is infused with the language of the outdoors. Over the years, his poetry has won him numerous awards, from the Pulitzer Prize in 1986 to the Bollingen Prize in Poetry in 1997.

And although Snyder may not be a big fan of Dharma Bums, the book itself does give a generalized (if distorted) overview of the real bard. As in the book, Snyder is interested in Buddhism and is a proponent of environmentalism, and was active in both long before they became hip trends. Snyder acknowledges his early ecological mindset by citing his Four Changes manifesto, which he wrote in 1969. Looking back, Snyder is still amazed by how well the ideas about population, energy, pollution and other ecological issues have held up over time. “My gosh, it could have been written yesterday,” he says.

Snyder is currently working on a manuscript about walking up Mount Tamalpais in Marin County that combines his passion for the outdoors with his interest in meditation.

In Buddhist tradition, walking is a form of meditation. A Buddhist since age 19, Snyder studied the Rinzai Zen lineage of Buddhism in 1956 from a roshi in Japan, and since then has led meditation retreats (or sesshins) in North America. He continues his practice of sitting meditation and chanting sutras on a daily basis.

“They’re so much a part of who I am that I don’t even think about it,” Snyder says of the chanting and sitting.

When asked where he lives, Sny-der locates a geography that is specific not by an address but by its surroun-ding ecosystem.

“I live in the north end of Nevada County [in Northern California] on a watershed of the South Yuba River. It’s at 3,000 foot elevation, surrounded by Ponderosa pines [in a] black oak forest zone. I live three miles from a paved road with no electricity,” Snyder says. But when asked how much his home environment affects his writing, the poet confesses: “Not as much as people think.”