A man of peace talks about war

In an interview with Suthichai Yoon, the Venerable Thich Nhat Hanh discusses Zen Buddhism's responses to wayward youth, Iraq and his Vietnamese homeland

Bangkok, Thailand -- Thich Nhat Hanh, the 81-year-old Zen master from Vietnam who lives in exile in France but has been leading "peace walks" in Bangkok this month, has been called the world's most famous Buddhist monk after the Dalai Lama. 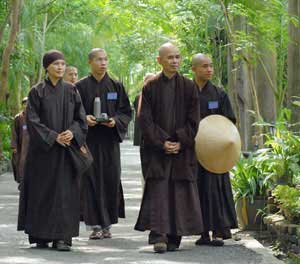 << As a monk you shouldn’t think of becoming a politician, but you do have your insights. You should be able to say, ‘What you do there, Mr Politician, is right or wrong’.

He is in Thailand, where dozens of his books have been translated, for Visakha Bucha Day and to offer blessings for His Majesty the King's upcoming 80th birthday.

On the eve of his speech on "Buddhist Contributions to Good Governance" at Bangkok's UN Conference Centre next Monday, he taped a segment of Nation Group editor Suthichai Yoon's "Cheepajorn Loke" ("World Pulse") programme to be televised on Channel 9 on Monday at 10pm and again on June 4.

The following are excerpts from the interview.

Some Buddhist organisations in Vietnam don't want you to go back, thinking you might be used by the government to legitimise its control over religion.

On my most recent visit, the most important thing I did in Vietnam was to organise prayer ceremonies for the dead. This was the first time they allowed us to pray for all people, not just communists. We prayed for everyone, regardless of religion or political parties, so this was a big step forward.

We held one in the south, one in the centre and one in the north, and many people attended - Buddhist, Catholic, Protestant - because everyone needs to practise [mindfulness, with peace of mind as the goal]. The war created a lot of pain, suffering and injustice. If we don't practise, we don't transmit [peace] to our children, and their children.

It's a kind of psychotherapy for the whole nation. We were overloaded with names we'd been asked to pray for. At all three ceremonies, it was raining very hard. People felt relief. Many people cried. These tears are very healing.

We expected the president, the prime minister and the president of the National Assembly to come, but they didn't dare. I think that in their hearts they wanted to come. We've noticed that the Communist Party members are thirsting for spirituality. Many of them came to the dharma talks with their families.

Vietnam is moving toward capitalism and the economy is booming. Do you think the spiritual side of the nation can stand up against capitalist ambition?

There is an urge to have a spiritual dimension in our daily lives. People are very thirsty.

We also had sessions for business leaders. Most of them had never come to the temple. But business leaders also suffered in the war, so they come in great numbers to learn.

This is your first visit Thailand in 30 years. What do you think about the development of Buddhism here?

The way of teaching and practising Buddhism should be renewed in order to speak directly to the younger generation and the more intellectual people. If we don't refresh our language and our practice, the younger ones won't feel at ease.

That is what we've been trying to do for decades in Europe, in America, and now many young and intellectual people come to practise. We believe that if it works for the West, it will work for Asia as well.

Tell us about "engaged Buddhism".

It can help us solve the problems of the heart by releasing the tension in the body and the mind and transforming the suffering in the heart. You establish communication and reconcile with other people. This is practice, not just prayer. Buddhism is as an art of living rather than mere belief.

How do you apply it in daily life? How do you advise young people to be good Buddhists in everything that they do?

They have to learn how to live mindfully, every moment. While driving, you can drive mindfully. Talking, you can talk mindfully. Otherwise your mind wanders and you're not there to take of yourself and the people you love.

These young people must have asked you whether you believe in God. How do you answer? Where do we go after we die?

Most of the people who come to us don't feel comfortable with the Judaic and Christian churches. If people think of God as the basis of being, somehow equivalent to nirvana, that can be acceptable to Buddhism.

You cannot describe God in terms of language. God is something to be experienced only. In Buddhism you can't describe nirvana - you can only touch on it. Nirvana is the here and now.

Not only after we die, but right now, we speak of "continuation" in terms of karma. When you talk, that is also a kind of energy, and your talk can have an impact right way on your health and on the health of the world.

So the dissolution of our body doesn't mean the end of what you have created. To think that after the body's dissolution there is nothing is a very short-sighted view, and not very scientific. What we produce as talk, speech and action will continue for a long time into the future. And that is the ground of our rebirth, our continuation. This kind of teaching can be accepted by scientists. We have organised retreats for scientists, psychotherapists ...

We have also organised a retreat for congressmen in Washington. Many of them came and they enjoyed it, because their lives are very stressful, very busy. Now those congressmen know how to walk mindfully and eat mindfully to reduce the tension. They can think more clearly and do their work better.

Do you support Buddhists getting involved in politics?

You should not distinguish too much between politics and non-politics. Sometimes you have to boycott coffee from a country because politics is involved in everything, and we have to refrain from consuming something because, if we did, it could create more suffering.

Do you allow your monks to take political positions?

Yes. As a monk you shouldn't think of becoming a politician, but you do have your insights. You should be able to say, 'What you do there, Mr Politician, is right or wrong. We support you if you do the right thing, the thing that does not create suffering. We oppose you when you do things that can create more suffering.'

That is a political stance, and you don't need to be involved in politics in order to express yourself like that.

What's your position on the war on Iraq?

The day after the destruction of the Twin Towers I advised the American people not to start a war with Iraq, to be calm and ask why have they done such a thing to you. You might have done something; you might have said something that made them hateful, angry toward you.

If you respond to it right away with violence, you will bring about a lot of suffering to your nation and to other nations. But it started right away, minutes after the event. Now people have found that what we said was true.

Have you condemned terrorism?

The word is not "condemnation". It is about looking deeply to see why such a thing has happened. There must be a lot of anger, a lot of frustration, a lot of wrong perceptions that have led terrorism to be born.

If you want to uproot terrorism, you have to remove these kinds of perceptions, and that cannot be done with bombs.