Not all monks are dull, humourless ascetics in saffron robes and here’s Tsem Tulku Rinpoche to prove it.

Kuala Lumpur, Malaysia -- IT’S 2am, and I am driving around Kuala Lumpur’s dark, dank Chow Kit streets with Tsem Tulku Rinpoche and some of his students. He’s making us play the “pick game” where we must choose between any two of our most feared or disliked scenarios and people. 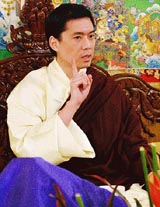 So here we are peering out the windows to spot transvestites, prostitutes and the homeless, the people that most of the city is oblivious to, or doesn’t want to know. Tsem Rinpoche, resident lama (teacher) and spiritual director of Kechara House Dharma centre in Petaling Jaya, often speaks candidly about wanting to bring spirituality to “the people who nobody else wants.”

Much in the spirit of new-generation lamas like the controversial Singa Rinpoche, who was recently banned from entering Taiwan, and Dzongsar Khyentse Rinpoche, who doubled up as director of the internationally-acclaimed movie The Cup, Tsem Rinpoche kicks dharma (spirituality) out of the cave and into the much more vigorous, defiant and hedonistic 21st century world.

He promotes a “brand” of spiritual practice that doesn’t require any compromise on who we really are. His diverse mix of students is evidence enough of that. Dharma talks at Kechara House find local fashion personalities sitting on the floor next to award-winning singers, college students, high-powered business women and KL’s socialites as well as former drug addicts, gamblers, manic depressives and self-confessed bad boys from gangs. With Tsem Rinpoche, you start where you are.

Even the fact that Malaysia does not have a predominantly Buddhist mass consciousness doesn’t faze him. Instead, he actively promotes the strong inter-religious and racial harmony here.

“We are fortunate to live in a country where the Government gives us the freedom to do as we like (as long as) we follow the law.’’

Tsem Rinpoche’s gurus from Gaden Monastery in India sent him to Malaysia in 1992 to teach as they felt it would be most beneficial for people in this region. He currently lives full-time in KL. He started Kechara House in 2000.

“Dharma centres serve as places of education for Buddhists to become better citizens of a country, not to make other citizens Buddhist,” he explains.

In inspiring a younger generation, he is incredibly candid about himself: “Look! Do I look holy? Do I look disciplined? Do I look like a ‘high holy Tibetan lama’? No! I am you; I think like you and have the same problems as you. 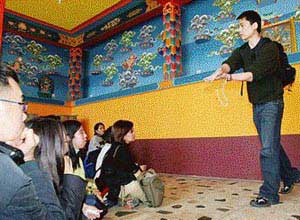 “If you like to eat, then eat! If you like having sex, then have it! If you like nice clothes and jewellery, buy and wear them! I want the freaks, the people who can be themselves. Live with the motivation of being kind, change your minds, but also play computer games, have sex, party. What’s wrong with that? We’re not Buddhas yet,” he points out, realistically.

“The important thing is to keep your motivation good, clean, straight.”

Tsem Rinpoche, 41, embodies this balance himself, and is willing to try unconventional methods of reaching out and appealing to people, especially the younger generation.

That was how he became a runway model for about a month in 2004, working with Catwalk Productions (owned by Ming Chan, who is one of his students) and singing in karaoke sessions with his students. He is also on YouTube (which has brought visitors from as far as Australia and America to him in KL).

He cites the Dalai Lama, Mother Teresa and Gandhi as among his favourite people for their outstanding messages of peace and kindness; but also Madonna, Ru Paul (which perhaps explains Tsem Rinpoche’s entertaining diva-like antics during his sermons and talks) and Bette Davis for “their determination and strength.”

Though Tibetan Buddhism is famed for exotic rituals and high tantric empowerment, Tsem Rinpoche prefers to stress on the importance of mind transformation teachings (lojong), focusing most ardently on developing “basic” qualities of compassion, kindness, generosity, patience, effort and wisdom.

His central teachings are based on The Eight Verses of Thought Transformation composed by Tibetan saint and scholar Geshe Langri Tangpa which concentrates on changing our perspectives on the world and people around us.

Tsem Rinpoche will soon be releasing Compassion Conquers All, a book of teachings which deals specifically with the Eight Verses and how to apply it practically within our lives.

“Spiritual practice is a change of attitude,” he points out in his book of collected teachings Nothing Changes, Everything Changes, “It has everything to do with us changing – how we perceive people, how we react to people, how we talk, our emotions, happiness, anger, delusions, jealousies, successes, motivations, enthusiasm – and the beauty is that nothing around us changes.”

Often, he speaks of depression and the mental afflictions that so often plague the 21st century, and thus, the corresponding need to apply spiritual transformation and practice to turn our minds towards a more peaceful place.

“We have everything that we need – technology, comfort, convenience. Physically, we’re not suffering anymore but so much suffering now happens within our minds.”

The “suffering” he refers to is not necessarily what we commonly regard as great pain, but includes daily frustrations with family, career and relationships, our strong attachment to and expectations of things and people, and the corresponding struggles we face when there is unexpected change or disappointment.

The lojong, thus, cut across religion or cultural barriers by offering an alternative philosophy of living that can be applied variously in our lives.

By now, it’s past 3am and the “pick’’ game is over. When I ask him why he never lets us pick between nice things, he replies: “Those things and people aren’t inherently disgusting themselves. They’re only disgusting because you think they’re disgusting. And until you give up those hang-ups, I’ll keep making you pick!”

There are buttons to be pushed, and Tsem Rinpoche makes sure yours are thoroughly flattened. After all, it is only in the truly unexpected that we learn – and just as Chow Kit's roads seem an unlikely lesson, it’s actually just been yet another journey through our own untempered minds.