The Lama in MySpace

London, UK -- He spends his spare time surfing the internet and watching The Simpsons, his heroes are England cricketers Kevin Pietersen and Andrew Flintoff and he'd love to meet The Beatles and Elvis. 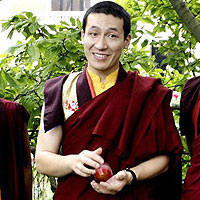 It sounds like any other 24-year-old's profile on social networking site MySpace. But forget about meeting up with this guy for a drunken one-night stand - because he is one of the holiest men on the planet.

This is His Holiness Karmapa Trinlay Thaye Dorje, also known as the Black Hat Lama, the 17th reincarnation of his line and head of the Karma Kagyu school of Buddhism.

His Holiness has hundreds of thousands of followers based in more than 600 centres and monasteries all over the world.

He holds the third most senior post in Buddhism, behind the Dalai Lama and Panchen Lama. He was recognised as the 17th reincarnation of the Karmapa when he was just 11 and was taken to India for a life of prayer and meditation.

But it's not all about contemplating the mysteries of life on a remote hillside cave - last week he launched his own MySpace page.

He says: "Lots of students are keen to know what it is like to be a Karmapa.

"The internet is a common language. You can really establish a connection and people can get to know more about the faith."

His Holiness is single, doesn't smoke or drink and loves kids but admits they're "not for him". Which probably has something to do with the vow of chastity he has taken.

Yet he loves the Black Eyed Peas, famous for their distinctly non-Buddhist hit My Humps.

He's also a fan of action films including SpiderMan 3 and his favourite actor is Peter O'Toole.

He says: "I spend much of the day studying Buddhism but I also have a PS3 and like surfing the internet and listening to music.

"You can enjoy all the world's modern conveniences while still working towards the best personal behaviour. That is one of the things Buddhism teaches."

The Karmapa is almost as passionate about cricket as he is his faith. In one blog entry last week, he wrote: "I am in Switzerland at the moment where the weather is fine but I hear that it has been raining in England. I hope this does not affect the cricket as I hope to watch some of England's test match while I am in the UK.

"Cricket is a great passion of mine and I sometimes play with the monks in my home in Kalimpong, India.

"I'm actually a great fan of Kevin Pietersen's batting and was pleased to learn of his double century recently against the West Indies.

"Cricket can also bring people together through sharing time at a match, in a united spirit, as it has done with India and Pakistan."

Alongside Buddha and Mahatma Gandhi, the Karmapa lists both Pietersen and England teammate Freddie Flintoff as his heroes, though he supports South Africa - and says he would love to meet AB de Villiers and Shaun Pollock.

The MySpace profile was set up to tie in with the Karmapa's first visit to Britain since 2005.

At the weekend he spoke to more than 1,000 students in London about the Karma Kagyu branch of Tibetan Buddhism as part of a 12-week tour of Europe.

He said: "The meetings were wonderful. I'm always overwhelmed by the reception I receive from everyone. I wish my stay was more than three days. We were able to see Buckingham Palace, Westminster Abbey and Trafalgar Square.

"I remember seeing the lions before in a cricket magazine - with Kevin Pietersen sitting on one!

"But to be able to see things first hand was really something else."

He also uses the site to teach visitors about his faith.

Matt Huddleston, the Karmapa's representative in Britain, says: "His Holiness is trying to reach out to people. He's 24 and lives in a part of the world where lots of people communicate in this way. It is a chance to communicate with people all over the world. He's a 21st-century Lama and Buddhism is a 21st-century faith."

The Black Hat Lama - so called because of his traditional black crown - is a hotly disputed position in the Buddhist world.

Some followers do not recognise Trinlay Thaye Dorje as the true incarnation of the Karmapa.

But His Holiness refuses to be drawn into the politics of Tibetan Buddhism. Instead, he says his wish "is purely for peace and betterment for the world". And perhaps a spot of cricket in the afternoon.

THE TALE OF TWO LAMAS