Los Angeles, USA -- One could hardly blame Kunchok Gyaltsen for the culture shock he experienced upon arriving at UCLA, where he is currently a doctoral student in the School of Public Health. 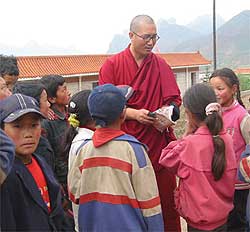 << "The goal of public health is the well-being of the individual and the community. That fits very well with my beliefs as a Buddhist." -- Kunchok Gyaltsen

Gyaltsen is from the city of Xining in Qinghai Province. The province is among China’s poorest and most remote. "Los Angeles is too big," Gyaltsen says, laughing. "But I keep my life simple and quiet." Even in a city as diverse as Los Angeles, Gyaltsen is sure to stand out when he rides the bus from Westwood to his temporary home in Santa Monica.

Gyaltsen is a Tibetan Buddhist monk, and a medical doctor trained in traditional Tibetan medicine. Since 2001 he has been executive director of Kumbum Tibetan Medical Hospital, overseeing a staff of thirty medical professionals and trainees. As he became more involved in hospital management, he began to realize that a system in which more patient visits was considered an indicator of success didn't gibe with his values. "It made me uncomfortable," says Gyaltsen. "I want to see fewer patients, because that means fewer people are suffering from illnesses."

Gyaltsen knew what he wanted, but wasn’t sure how to achieve it until he discovered the field of public health. He learned English and has spent much of the last six years in the United States, most recently at UCLA under the guidance of Dr. Anne Pebley, who helped Gyaltsen secure funding from the school’s Fred H. Bixby Doctoral Fellowship Endowment that is critical to completing his education. While in the United States, Gyaltsen has also garnered support for the Tibetan Healing Fund (www.tibetanhealingfund.org), the nonprofit organization he founded in 2001 to raise money for education and maternal-and-child-health projects in the Tibetan region.

Initiatives have included the training of approximately 3,000 village women to be health educators and community midwives. A natural birth and training center is also being built.

"The vast majority of women are not getting prenatal or postnatal care, and are delivering babies at home, often assisted by family members who have no training," Gyaltsen says. "As a result, the infant mortality rate is high." Compounding matters, in many parts of Tibetan society it is taboo for women to discuss health issues, even with their husbands, and when problems develop they tend to delay seeking professional care.

Observing the U.S. health care system up close has underscored for Gyaltsen some of the shortcomings of the Tibetan system, which has little in the way of a public health infrastructure and lacks the sophistication of medical training found in the West. On the other hand, Gyaltsen believes Tibetan medical doctors tend to be better than their U.S. counterparts at communicating with and showing compassion for their patients. And the biggest surprise when he came to this country was to see that for all of the technological prowess of the U.S. health care system, so many lack access to basic health care-- a major concern for those in the profession Gyaltsen hopes to promote when he returns to his home.

"The goal of public health is the well-being of the individual and the community, and to reach that goal means promoting good physical and mental health as well as having good social support and meeting basic needs such as water, sanitation, food and shelter," says Gyaltsen. "That fits very well with my beliefs as a Buddhist."