Zen Center teacher and minister find enlightenment in watching others on their spiritual paths.

Orange County, CA (USA) -- Minutes before the sky resembled an orange and pink utopia at dawn, Deborah Barrett and her traveling companion sauntered to the Bodh Gaya temple during their trip to India in early May. Few taxis roamed the area. Roads were relatively empty. Vendors had yet to set up shop. 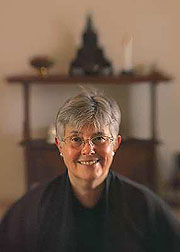 But as Barrett entered the temple, the site where Gautama Buddha reached enlightenment, she wasn't so much overwhelmed by where she was but the visual serendipity: monks and Buddhist practitioners from around the world going about a variety of devotions in this one space; some wearing jeans, some wearing robes.

"People from diverse backgrounds were all gathered and they were all meditating in their unique manner in their tradition," Barrett said. "I had this immense feeling of peacefulness and joy. It was an eye-opening experience."

Barrett, a meditation practitioner for more than 30 years and the resident minister at the Zen Center of Orange County in Costa Mesa, was in India on a voyage to see the historic sites of Buddhism, a kind of "in the footsteps of the Buddha" trip, which left her primarily roaming the Buddhist circuit in the Bihar region of India.

"I've traveled to Buddhist places for over 15 years," Barrett said. "India was last on my list simply because … it's harder for me to get to India."

Barrett avoided paying the round-trip ticket to India, which can run more than $1,000, after racking up enough frequent-flier miles for a free ticket. She and Sr. Virginia Luchsinger, also a teacher at the Zen Center, sweltered in India's blistering heat throughout their three-week excursion.

"When I travel it's kind of a pilgrimage because I not only see these sites and their historic values, but I sort of mediate and spend time there and try to absorb the meaning," Barrett said. "There is a spiritual purpose of the journey ... of deepening my own spiritual practice as I'm experiencing these important sites."

The duo traveled to Lumbini, a Buddhist pilgrimage site, where Guatama Buddha was born. They roamed Sarnath, where Buddha is said to have delivered his first teaching.

Barrett even found herself in Bodh Gaya sitting near the stone marking the area where Buddha is believed to have reached enlightenment under the Bodhi tree. Legs crossed, eyes closed, Barrett sat calmly. There were no thoughts of awe. Just silence.

"I wasn't preoccupied with where I was sitting," Barrett said. "I look to Buddha as an example. He did his meditation … now I have to carry on his example and do mine. There was really just a sense of carrying on his tradition and waking up for myself. It made me feel like completing my meditation with complete whole-heartedness."

Next on their journey was Kathmandu, the capital city of Nepal, followed by a visit to Tibet.

"Though Zen Buddhism, my own interest, is very different from Tibetan Buddhism, I still wanted to experience some of Tibet since I was close by and it has been so popular in the U.S.," Barrett said.

The friends took the self-guided route for their three-week long excursion rather than engaging in the rushed agenda sometimes characteristic of group tours.

"I have always liked the independence of spending as much time as I want at a certain place … moving at my own pace," Barrett said. "I like the freedom, and I enjoy the preparation and research involved."

Although Barrett was impressed by the architecture of the temple, industrious with her camera at local museums and relaxed by the serene atmosphere, she said she was most intrigued by the way Zen Buddhism has interlaced across the globe, while also adapting to each culture.

"It was interesting to see how Buddhism changes from country to country," Barrett said. "I'm very satisfied that I've seen these sites and was able to really enjoy the sort of international culture that has arisen around them."

While in the Buddhist Circuit, Luchsinger said a sacrosanct aura permeated the area as Buddhist visitors from different pockets of the earth shared the experience.

"The marvelous thing was seeing all these people on a spiritual path," Luchsinger said. "Everyone seemed to have found their own way."