Sedona, AZ (USA) -- Author and journalist Perry Garfinkel will stop by Sedona this week to support the paperback release of his national bestselling book “Buddha or Bust: In search of truth, meaning, happiness, and the man who found them all.” 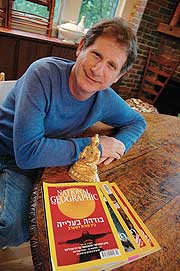 For more than 30 years, Garfinkel has traveled the world covering stories for National Geographic, The Travel Channel, The New York Times and others.

He’s co-founded two magazines, written several books and run the journalism gamut, but his whole veneer as a hard-hitting news reporter crumbled when he came face to face with the 14th Dalai Lama, Garfinkel said.

Walking silently, hand-in-hand with one of the world’s most revered spiritual leaders, made him so nervous that he barely even remembers speaking with him, he said. He thought he blew the interview of a lifetime.

Later, as he poured through the recording of disjointed sentences and studied bits of wisdom, he was struck by the Dalai Lama’s brilliance and in-the-moment thoughtfulness.

“None of his answers seemed canned,” Garfinkel said.

Perhaps it was the tape, bearing a message from the Dalai Lama’s young nephew in Amdo, the Tibetan village where the Dalai Lama was born, that struck a cord.

“Uncle, every day we hope and pray to see you again in Tibet,” he said.

As Garfinkel sat quietly, the Dalai Lama placed headphones over his ears and listened to his nephew’s impassioned plea.

Touched by the gesture, and perhaps saddened by the unlikely prospect of ever returning to the place of his birth, he seemed to soften, according to Garfinkel, and the two had a real conversation.

Buddhism, he told Garfinkel, is more like science, psychology and philosophy than religion. It’s a tool for a living — a prism through which each individual can view their own spiritual quest — their search for truth, meaning and happiness.

Traveling the world, Garfinkel went on his own search. Throughout the United States, Poland, India, Thailand, Sri Lanka, Hong Kong, China, Tibet, Japan and France, he asked many questions of many people and was met with a mixture of burgeoning enlightenment, unlikely heroes and leader hypocrisies.

His book is about the history of Buddhism and its growing prominence in popular culture, but it’s also about the search for self, Garfinkel said. For him, researching and writing it was part of his own spiritual journey.

He spoke with some of the world’s leading Buddhists, including Vietnamese Zen Buddhist Thich Nhat Hanh and the Dalai Lama, but there were many other lesser heard voices to consider.

From the poorest untouchables of the Hindu caste system to the men and women in America’s inner city coffee shops, the real unsung heroes of Buddhism are often not so obvious, Garfinkel said.

As the world swirls with religious strife and violence, there’s a yearning in America and elsewhere to make sense of the current spiritual paradigm, and the peaceful messages of Buddhism may have grown to fill it.

“The simple truths of Buddhism have a resonance that everyone gets,” Garfinkel said. He hopes that by visiting health spas throughout America, he can engage people in the wellness movement with those messages.

His tour, titled “The Buddha’s Massage: The ultimate pampering of the mind,”

will offer insight into practices developed by the Buddha himself to cope with life’s problems.

In America, there’s a lot of attention paid to the body, but not enough to the mind and spirit, Garfinkel said. Maybe he can add some balance.

Garfinkel will make two stops on his way through Sedona. On Thursday, Aug. 9, he will speak at the The Well Red Coyote Bookstore at 7 p.m., and on Friday, Aug. 10, he will speak in the library at Mii Amo Spa at 6:30 p.m.

For more information about Garfinkel and his book, visit www.buddhaorbust.com.