Monk on a mission

Chan Buddhist monk Ven Heng Sure is a much sought after speaker who gives talks worldwide and through webcasts.

Kuala Lumpur, Malaysia -- FULLY robed with a seven-piece sash and the Avatamsaka Sutra (Flower Adornment Sutra) tied to his back, the young monk takes three steps and then makes a full prostration by the roadside. He gets up and repeats the procedure – san bu, yi bai (three steps, one bow) – throughout the day, every day, for two years and nine months. 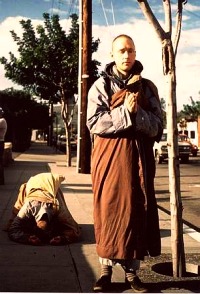 << Focused: A young Ven Heng Sure during his bowing pilgrimage in 1977.

That was the bowing pilgrimage undertaken by Venerable Heng Sure from May 1977 till the end of 1979, He covered some 1,280km of the California Coastal Highway from Pasadena, south Los Angeles, to Ukiah in Northern California. At the same time, he took a vow of total silence, which he observed for six years. Come rain, shine, snow or hailstorm, the then newly-ordained monk remained steadfast to his religious practice despite being viewed as weird by the American public at the time.

Today, Ven Heng Sure is a much sought after speaker who gives talks worldwide and through webcasts. The Chan Buddhist monk travels with his laptop and has his own blog. An accomplished musician, he recently cut a CD on American Buddhist folk music.

Born Christopher R. Clowery in 1949 in Toledo, Ohio, to a Methodist Scots-Irish family, he was ordained in the Mahayana tradition of Chinese Buddhism in 1976 at the City of Ten Thousand Buddhas in Talmage, near Ukiah, and took on the name Heng Sure, which means “constantly real”.

Considered one of the first Buddhist monks born and ordained in the United States, Ven Heng Sure attended the University of California in Berkeley in the 60s. While there, he was an anti-war activist and was active in theatre. After receiving his Masters in Oriental Languages, he met his teacher, the late Chan Master Hsuan Hua, who would later ordain him. Ven Heng Sure also has a PhD from the Graduate Theological Union (GTU) in Berkeley. He currently gives lectures at Berkeley and the GTU seminary.

After 30 years in robes, the 58-year-old monk has become a senior disciple of Master Hsuan Hua. He has been a trustee of the United Religions Initiative since 1997 and serves as a board member of the Interfaith Centre at the Presidio. He is also a director at the Berkeley Buddhist Monastery.

Ven Heng Sure is one of the speakers at the 5th Global Conference on Buddhism, which will be held at the Sunway Convention Centre in Bandar Sunway, Petaling Jaya, on Nov 17 and 18. The conference theme is “Transforming the Mind – To Create Happiness in Our Lives” and he will be speaking on Calming the Mind, Lessons from Chinese Chan.

Currently on a seven-week, seven-country Dharma tour, Ven Heng Sure took time off from his hectic schedule for this e-mail interview.

Why did you choose this way of life?

Chinese language study was the door to Buddhism for me. I was pursuing my Masters degree in East Asian Languages and Buddhism at the University of California, Berkeley, when I first heard the name of the Venerable Master Hsuan Hua. My former college roommate took me across the Bay to Gold Mountain Monastery in San Francisco and as soon as I set foot there, I felt as if I were returning to a home I had known before. Once I met Master Hua, I had no further doubts that learning from him was what I wanted to do with my life.

Some people view leaving home life as a form of escape, of abandoning the family and responsibilities. How do you reconcile this with being a monk?

If you want to escape reality, then do not go to a monastery. Is living at home surrounded by any form of amusement and distraction you can afford, including TV, movies, shopping, relationships, a higher form of reality? In a monastery there is only your mind, faults, habits, confusions and emotions to encounter. There is nowhere to hide from reality.

Before becoming a monk, I used to wait for the weekend. I couldn’t wait to get home from school to kick back and forget reality. As a monk I don’t relate to just one family, but to a community of hundreds of families that circulate around the monastery. I deal with all of the problems that they can’t handle: the deaths, addictions, fights and reconciliation, and the joys and successes as well.

Why the vow of silence during the bowing pilgrimage?

The bowing pilgrimage helped me to begin to see through the illusion of self-importance; the silence vow taught me that my inner wiring was crooked. I couldn’t tell the truth from a lie because my motive for speech was so often a wish to make others like me. If a joke or an exaggeration could get a laugh then I would twist or embellish the truth without a care. When one person prevents one arrogant thought and one crooked word from entering the mainstream social interchange, then that’s a wholesome deed. Our minds touch each other; when my mind is free of anger and cynicism, I’ve benefited the world.

A monk’s life is supposed to be austere. Has there been criticism of your blogging on the Internet and making music?

I hear alarm bells when I read the words “supposed to be”. They almost always precede a stereotype or an unexamined preconception. As for how austere a monk is supposed to be, let’s look at my lifestyle.

I eat one meal a day and I’m a vegan. I’ve never used an ATM card – it didn’t exist before I left home. I have no bank account or credit card; I wear the same robes I’ve worn for 20 years; I work 18-hour days, I don’t watch television or go shopping and have no girlfriend or spouse. I didn’t talk at all for six years. Is that strict enough?

People are pretty demanding of monks. When I was silent, people called me selfish for not sharing what I knew. Now, if I use the Internet and sing Dharma songs, I’m criticised for being insufficiently austere. Monks in our tradition fast 23 hours a day, every day. Following our teacher’s inspiration, we dedicate the food we don’t eat every day to all the tens of thousands of people the world over who die each day due to nutrition related illnesses.

After 30 years in robes, what is the most gratifying thing you’ve gained?

A growing awareness that my thoughts matter a great deal to the well-being of the planet and our larger human and non-human family. If I can refuse to get depressed or frightened by what people do, if I can resolutely bring my chaotic thoughts back to stillness and wonder at the marvel of the infinite conditions swirling around me, and if I can vow to never harm a soul with thought, word, or deed, then my feet are on the path to awakening.

------------------
# For details on the Global Conference on Buddhism, click on www.bodhivision.net/gcb2007. For more information on Ven Heng Sure, visit his blog at paramita.typepad.com.