Vietnam veteran, who is Buddhist monk to speak in Walpole

Walpole, MA (USA) -- Claude Anshin Thomas wears so many hats he could fill a walk-in closet with them when he goes to sleep at night. 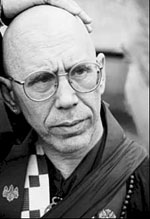 He is a Buddhist monk and a Vietnam veteran, a musician and a best-selling author, a Shaolin kung fu marital artist and an activist, a Zen philosopher and a colloquial conversationalist.

With such an impressive wardrobe of headwear, he's sure to be an excellent speaker when he is presented to Walpole as the Peace and Justice's October speaker.

Thomas will make a stop at the Walpole Library as a part of a speaking tour which has spanned Europe and America. His speech will be about ending war and living peace.

Current events will be discussed spanning conflicts in Iraq, Afghanistan and Darfur as well as street violence in nearby Dorchester. Thomas says he will demonstrate the personal routes of war and show how the violence works and why people make the decisions they do. He also plans to discuss "collective conscience" and the culture of war.

Thomas said he does not want to politicize the event but would rather look to "personal ownership" and the responsibility everyone must take.

Thomas' personal experience with war and violence will also play a major role in his speech. "I was setup to make the choices I made," he said on the phone from Pensacola, Fla.

After graduating high school in a small town in Pennsylvania, Thomas, 17, was eager to join the Army and enter the Vietnam War.

"I had been fed the glory of war my whole life," Thomas said, from his relatives, competitive sports and Hollywood.

He quickly realized he had gotten himself into a lot more than he expected as he stepped off the plane in Vietnam.

"This wasn't an Audie Murphy film, it was the real deal, and I was scared," said Thomas, but he couldn't show he was scared, because "that wasn't cool."

He served in Vietnam for a year as a helicopter crew chief, was wounded and was shot down five times.

After being honorably discharged, Thomas said he didn't immediately have the luxury to begin to ask too many questions. "This was a process for me," he said. Thomas began to think that war is not inevitable and violence is never a viable solution.

"The groundwork had been laid for that transition to talk peace," said Thomas.

In the early '80s, Thomas found himself in a drug and alcohol treatment center in New Hampshire. He says that is where he began to experience life directly for the first time. The facility gave him a sense of inter-connectedness that previously eluded him, he said.

A counselor advised him to attend a retreat led by a Buddhist monk. Thomas was hesitant at first because he didn't see any solutions in organized religion, but he soon found out he was wrong. "It just made absolute sense to me," Thomas said, "like I had known this all along."

"From there, I just kept making the next step." Before Thomas knew it, a four week retreat turned into a three-year stay in a Vietnamese monastery in southern France. "I just kept doing the next thing that was presented to do. That contributed in saving my life."

In 1995, Thomas was ordained a Zen priest in New York.

"One of the things I experienced was a sense of belonging or ownership," he said.

Thomas returned to Vietnam for a peace walk where he was forced to battle many emotions. "I had a special right to be in Vietnam," he said. "I left blood there. I fought there."

Issues were brought up concerning the Vietnam War that he was previously unaware of, like how South Vietnamese soldiers (who would often fly with Thomas) when asked to do dangerous tasks, would pretend to be unable to speak English even though many were trained in the United States.

Today, along with public speaking, Thomas conducts extensive peace walks around the globe. He is the founder of the Zaltho Foundation (www.zaltho.org), a nonprofit organization with the purpose of promoting peace among individuals, families, societies and countries.

He is also the author of "At Hell's Gate," a best-selling memoir chronicling his transformation from solider to a life of peace.