The cult of the Zen stick

British band "The Cult" seek peace in these crazy times

Wisconsin, Milwaukee (USA) -- "In Buddhism, when students fall asleep or drift off during meditation, the roshi (teacher) will come along and hit them with a Zen stick," says the British rocker, who after a 6 1/2-year hiatus is back fronting The Cult. 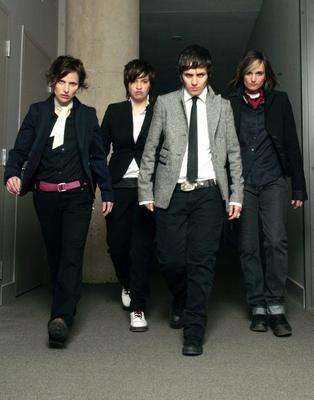 << To Ian Astbury's way of thinking, sparing the Zen stick can spoil the culture.

From The Cult's vantage point, the present is not an especially nice place, at least as depicted on "Born Into This," the new CD that The Cult is spotlighting on the tour that brings them to The Rave on Saturday. The band's current lineup includes original guitarist Billy Duffy, bassist Chris Wyse and drummer John Tempesta.

"Born Into This" compares favorably to The Cult's best albums, 1987's "Electric" and 1989's "Sonic Temple." The churning title track gives the lay of the land.

"We are on the precipice of our own destruction," Astbury says in an interview. "Our spiritual lives are in such ruination. Our reason to be is hidden away from us, and we're going around like zombies."

The malicious, whipsawing "Dirty Little Rockstar" is "a cultural weather report," Astbury continues. "It's about the appropriation of the term 'rock star,' people sucking on the bones of Brian Jones, Jim Morrison and Joe Strummer, assuming just because they create an image they are part of that pantheon.

"To be a true rock star, you've gone out there and been a truth seeker," he adds. "You've gone beyond the pedestrian. Now (the term) is appropriate to sell everything from baby food to a reality show. It's a ruse. All they're selling is snake oil."
Consumerism theme

"Tiger in the Sun" alludes to the ugly consequences of the war in Iraq, but Astbury says the dark, psychedelic-tinged track also is about "rampant consumerism."

"Certain people want us to buy more, consume more to fill a void between us," he says.

That theme is revisited even more directly in the nasty "Sounds of Destruction," which includes the lines "I got a fistful of ice/ I got a head full of speed/ Give me what I want now/ Give me what I need."

"Born Into This" is not all gloom and melancholy, however. "Holy Mountain," which Astbury says he wrote on acoustic guitar in five minutes, is "a song of gratitude and romance."

"Two-and-half-years ago, a woman came into my life who was a ball of energy and possessed a questioning and indomitable spirit," says Astbury. "Her name was Apolla, and our courtship took place in India, outside Bombay, in Puna. 'To be with me, you have to be in India,' she told me. I knew with every ounce of my being, that was the call for me. . . . She is an incredible muse and friend."

Astbury and his girlfriend, who is a writer and an actress, now split their time between Canada and the United States.

"It's precious to me what I've been given," he says. "My intention is not to drop the ball, to keep that integrity, to aspire to be the best I can be."

Astbury is unwilling to look back to the mid-1980s, when The Cult became one of the most successful British rock bands of the era with the hits "She Sells Sanctuary" and "Fire Woman."

Living in the present

Summaries of the band's career are "worthless" and "clutter for the mind." "They minimize and marginalize the intensity of what we experience in this moment," he says. "When we do that, we put in concrete all of our artists. We've boarded up the beautiful house that once was."

"The modern generation only appreciates something more saccharine and Disney-like." The solution?

"Realizing in the present moment that you can change anything," he says.