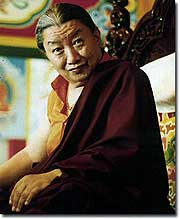 Trichen Dorje Chang, as he is known to many, passed away “without even the slightest discomfort, with a face even more radiant than before, and with a smiling countenance, Kyabje Rinpoche gazed lovingly at all those surrounding him” the monastery’s office revealed.

“Then, with the aspect of resting, Kyabje Mondrolling Trichen Jurme Kunzang Wangyal displayed the final activity of transferring his enlightened intention to another realm, in order to turn the minds of those to be tamed towards the dharma” the monastery’s official announcement stated.

As Tibetans celebrated their New Year on February 7, Kyabje Rinpoche bestowed his blessings upon the entire Sangha of monks and nuns of Mindrolling and other devotees, who came for Losar (Tibetan New Year) audience.

Born to the 10th Mindrolling Trichen Jurme Dondrub Wangyal and Yum Dawa Drolma (his mother), on the eighteenth day of the first lunar month of the Iron Sheep Year in Lumo-ra in Kham (Eastern Tibet) he escaped from Tibet in 1959 and arrived in India where he was installed as the Eleventh Mindrolling Trichen in 1962.

In the years that followed he worked with many lamas like the 16th Karmapa, who previously received his education from his father. In 1976 he and his family moved to Dehra Dun in order to oversee the building of the Mindrolling monastery.

Revered within the Tibetan community as an emanation of Padmasambhava, His Holiness the XIth Mindrolling Trichen is revered and respected throughout the Buddhist world as a great Mahasiddha and one of the greatest accomplished Tibetan Buddhist masters of this century.

At a young age of 18, he went into retreat, lonesome meditation in a cave, and spent a total of fourteen years in retreat during his education. He excelled in his studies and discovered the terma (hidden treasure) of the Compassionate One, "Jigten Wangchuk Pema Garwang." He was therefore instructed to pass the teachings on eleven times to fortunate and worthy students.

Sources from the monastery told Phayul.com that the entire sangha of Mindrolling was performing all the ceremonies for the Kyabje Rinpoche’s Parinirvana with their hearts united in devotion.

At the time of filing this report, the Mindrolling Monastery was performing the Minling Dorsem, Nara Dongtru and Thugje Chenpo ceremonies. Each ceremony is being performed at the Mindrolling Monastery in three different shrine rooms by one hundred monks in each of the rooms. Kyabje Sakya Trizin, head of the Sakya school of the Tibetan Buddhism will be presiding over the 3rd day ritual on the 12th of February and will lead the kha-chö drubchö or the Vajrayogini sadhana.

Besides, several leading Tibetan Buddhist masters are said to be attending the main rituals and exclusive reports will be made available on Phayul.com.